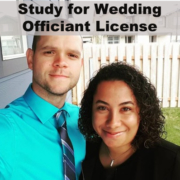 Hello! My name is George Alvarado, and I am studying at CLI for the wedding officiant license. Originally from Chicago, IL, I am an American with Puerto Rican descent. I grew up in a middle-class home with parents that worked hard to give me a better life than they had. My desire to do the best I can stems from my upbringing. However, I didn’t grow up in a Christian home. So spiritually, I was not privileged to hear the gospel.

My childhood was not without its sinful behaviors. I had great parents, but I was a struggling kid. Aside from the usual lousy attitude and disobedience, when I began to reach my teen years, I was arrested twice. It was primarily my mouth that got me in trouble. My dad handled the situation the best way he could to keep me from further trouble. But, he also had to stay on top of me until I graduated and joined the Air Force.

Nevertheless, it was in High School that I first heard the gospel. It was at the funeral of a kid who died in a tragic accident. Although that day, when during the service, I falsely repented, it was still the beginning of what was to come in the future for my life in Christ.

By the time I joined the Air Force, I was doing my own thing. I hypocritically called myself a Christian, although it was easy to tell that I was not. About a year before my conversion on January 11, 2004, God began to convict me for my sins. Every day when I woke up, the first thought on my mind was, “If you die today, you are going to hell.” I knew this was true of me. But, of course, sin finds a way to justify itself, and I eventually just went about my day.

Right before I received orders to travel to England, I got to the point where I could not handle it any longer. I called my then fiancé and told her I could not continue to live the way I was. I let her know that I was going to church and wanted her to join me. She did, but she wasn’t all that thrilled about it.

Then, on January 4, 2004, after the preacher finished preaching, I began to weep and sob concerning my sin. My only thought the whole time God was regenerating me was, “How could you forgive me after all I’ve done? Even calling myself a Christian hypocritically. How could you forgive me?” That is the question I asked myself for about a half-hour while I was pouring out my heart in repentance to God. However, at the finish, I was refreshed and born again! Never to look or go back to my lifestyle of sin.

My call to preach was self-evident. Immediately, I shared the gospel with family and friends. When I arrived in England, I shared the gospel and witnessed in the streets for about six and a half years. It was when I first open-air preached in Cambridge, England, that I realized I was called to the ministry. And my time in those streets was foundational in the years to come.

During my time in England, I also had many struggles with some pastors who didn’t find evangelism appealing. But despite those conflicts, my theology and my experience grew. I matured as I continued to remain faithful despite opposition in and out of the churches.

Whether on vacation or when stationed in the USA, I preached in and out of the church as well. I have preached in various cities and led evangelism teams. Currently, I enjoy teaching Bible studies at my local church. Furthermore, I write blog articles, record podcasts dealing with a wide range of topics, and participate in apologetics and debates.

In my ministry, I have been giving formal marriage counseling to couples. It has been a blessing to sit down with couples who desire to honor God in their upcoming marriage. With the counseling, often the pair would like me to officiate their ceremony. The state I live in requires certification to do that. The Wedding Officiant license offered at the Christian Leaders Institute is going to provide an excellent opportunity to fulfill that role for these couples, and the ones to come.