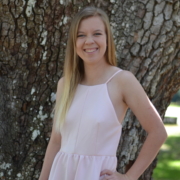 Hello! My name is Emily Beach and I have a free Bible training opportunity at Christian Leaders Institute. I was raised in Orlando, Florida, but currently, live in Jacksonville. I was raised by a Catholic mother and an atheist father. As you can imagine, the church wasn’t a huge part of my life due to that awkward combination. After my parents divorced when I was four, my mother started taking me to mass with her but that didn’t last long. She drifted from the church before I could even have the slightest understanding of who Christ was. Eventually, I figured out on my own and understood what the Gospel was but didn’t fully understand what it meant.

As life went on, I identified as a “Christian” without knowing what I was truly saying. When I was 17, I was raped by a co-worker whom I considered a friend. After that, I was a full-blown atheist just like my father. I had no faith and denied that Jesus is Lord and Savior. I made many questionable life choices like drinking and partying. My senior year, I met a boy named Stephen. We became best friends and he slowly introduced me to Christ. He was unaware of this but I became intrigued again. I was nowhere near to being saved, but I did buy a Bible so I could learn as much as possible.

My actions did not reflect Christ just yet since my Freshman year of college I was lost my entire first semester. I went out to drink and party multiple times a week. I also slept around with who knows how many guys. And then Devin came along. I met Devin through Tinder and who would know that he is the reason I found Christ. After a few weeks of dating, he invited me to attend his church called Fruit Cove Baptist Church. I instantly felt welcomed and at home there. I started to attend every week. I then started to attend the young women’s Bible study every Tuesday night. I slowly started to commit myself more and more to this church. One day during service, we were talking about the resurrection and I started to cry. The service was so moving and everything hit me at once. Jesus is the Savior sent by God to show his love for us. Jesus did, in fact, die on the cross for our sins, he did rise from the tomb, and he will come again. Everything clicked at once and I felt a huge weight lifted off my shoulders. I was saved at the age of nineteen and baptized two months later.

Since then, I transferred to UNF which is closer to my church and my church family. Everything has been going well with the support and love of those I surround myself with. And now, I have a Bible training opportunity at Christian Leaders Insitute and I am excited to see what God has in store for me!