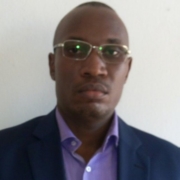 My name is Daniel Angole and I have been on a Ugandan ministry journey. I was born in May 1981 in Kampala, the capital of Uganda in East Africa I am the second born in a family of 2 brothers. We were raised by a single mother and had a non-resident father who passed away in 2013 and with whom we never had a close father-son bond. So we had were closer to our mother’s extended family. My mother was from a devoted Catholic background.

According to my mother, I fell ill at the age of 2 years. The political situation in Uganda at that time was very unstable. Afraid for their safety, people would generally be inside with the doors locked as early as 6 p.m. One night, my temperature rose so high and my mother was very worried. She had no first aid kit and no medicine in the house. She couldn’t get out of the house to look up any neighbors and see if any of them had some medicine. She whispered a prayer asking God to keep me alive just until morning so she could carry me to the hospital which was about 5 kilometers away. She kept putting a wet sponge on me to cool the temperatures but later on in the middle of the night my breathing stopped and I looked dead. As she silently wept, she heard a voice tell her, “Don’t you know that Jesus is the doctor of all doctors?” So she crept back to my still body and laid hands on me. She forgot all her Catholic recital prayers and said whatever was on her heart as she wept, going on and on for some hours. Eventually, she put her ear near my nose and felt my breath slowly return but from very far. Later she carried me and tried to breastfeed me. I hadn’t breastfed for some days but that night, she says, I did with some degree of urgency and for a long time. By morning I was completely well. When she carried me to go to the hospital, she detoured instead and ended up going to an Evangelical church that was along the way to the hospital. There at that church that day she gave her life to Christ. We all started attending that church (The Redeemed of the Lord Evangelistic Church). I grew up with that as my home church.

As I grew up and began to understand, I started attending Sunday school. One day the uncles and aunties told us that our parents’ salvation is not ours, but that each one had to confess on their own and accept Christ into their lives. So in 1989, I confessed Jesus Christ as Lord of my life and in 1990 got baptized by immersion on my Ugandan ministry journey.

I was very welcoming towards ministry and started off in the Sunday school choir, and later joined the youth ministry. We did ministry by observation, by doing what we saw others do. I personally had never had any proper discipleship or ministry training. I did what I saw others do, progressively taking on more responsibilities and some leadership roles.

In 2004, I met up with some youth leaders from the neighboring country of Kenya and they invited me to join them in some school ministries they conducted. It was then that I realized that some of the ministering we thought we were doing was actually motivational speech and sharing our experiences. Around that time, I met up with some people who were studying at the Nairobi Evangelical Graduate School of Theology. My desire for ministry training was aroused. I was pursuing a career in I.T. I decided that one day I will also pursue a course in Theology so that I can be a better minister who is well equipped to correctly represent Christ. I didn’t consider being in full-time ministry, but doing ministry with my career and reaching out to the unreached in industry or by being an example to them directly from the workplace.

In 2011, I moved to Dar es Salaam, Tanzania and joined the Dar es Salaam Pentecostal Church. The church had spiritual growth classes that I attended and also had a center where the Transformational Church Leadership (TCL) course offered by the Pan African Christian University in Nairobi, Kenya was conducted. I joined the TCL program until I came back to Uganda in 2018. Unfortunately, I did not get to complete all the courses offered in order to be awarded the diploma.

I still need proper theology and ministry training. as I am on this Ugandan ministry journey. So as I was searching on the internet, I came across Christian Leaders Institute. This was like a dream come true and a prayer answered on my Ugandan ministry journey. I can get the training I dearly desire without physically having to relocate or give up my other responsibilities. All this with an opportunity for a scholarship! God answered my prayer and what is required is my faithfulness and commitment to walk the course. Thank you, Jesus.

My heart and ministry desire is still with the youth and also ministry at the workplace. Everything I learn at CLI will be aimed at preparing me to be an approved minister who will correctly share the word of God in all truth. So I believe that Bible education/theological studies are crucial and something that I will be able to get from CLI.