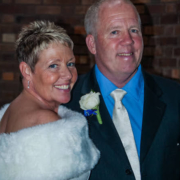 Greetings! My name is Dawna Brennan, and I am receiving free training for a Chaplain Minister at the Christian Leaders Institute (Learn more about Studying the Bible, Click Here). I am 51 and live in St. Louis, Missouri, with my husband, Joe, our youngest son, and my former father-in-law. Joe and I have 7 children between us, 5 girls and 2 boys, ranging in age from 18 to 38, and 2 grandchildren.

My parents divorced when I was five years old. Due to my mother’s lifestyle choice, she and her partner had difficulty finding an apartment. As a result, we moved around a lot and were unable to attend church. Thankfully, I had a wonderful, God-fearing, Great Grandmother who saw to it that my sister and I attended Sunday school every week. She was always singing hymns, telling us Bible stories, and making sure we knew that God loved us!

We finally settled in a little apartment in a small suburb outside the city when I was in 4th grade. By the time I was 15, that sweet Great Grandma of ours had been diagnosed with Alzheimer’s and came to live with us. Thus began my foray into training for a Chaplain minister and caregiving!

My First Marriage and Turning to Alcohol

I dropped out of high school and married my first husband when I was 17. He had a 3-year-old daughter, and by the time I was 22, we added 2 more daughters to our young family. I was able to get my GED during this time. However, we were young, inexperienced, and had no idea what a healthy marriage was. Therefore, when we started having difficulty, we bailed out rather than fight. We both ended up regretting this choice. Sadly, he died in a car crash about a year later, leaving our girls and I devastated.

Grieving and miserable, I retreated into the bottle. I soon found myself trapped in an unhealthy, abusive relationship, forced into a marriage I didn’t want. With 3 fatherless daughters and no escape in sight, I set out to make the best life possible for my girls. So, I did what any codependent, alcoholic wife does. I decided to stick it out, honor my vows, have a couple more babies, and try to change him. It didn’t work.

I loved my children and tried to instill Christian values in them. I even tried to take them to church, but my husband was mad at God and took every opportunity to interfere and undermine what I did. When his job took him out of town, I was grateful. It was during those peaceful weeks I managed to teach them compassion, gratitude, and generosity. They also learned about Christ.

My alcoholism progressed. When I was 37, I went to rehab and began attending a 12-step recovery program. Over the next several years, I struggled to maintain continuous sobriety. I had a pattern of building long periods of sobriety only to throw it away on a one day drunk and having to start over. I felt much shame about that, but I’ve realized that those relapses were a necessary part of my journey. So, I wouldn’t be where I am today had it happened any other way. During this time, I never stopped attending meetings. I made wonderful supportive friends and began depending on God like never before. Miraculous things happened in my life and the lives of those around me, and I knew without a doubt that God was real.

My husband was not supportive of my newfound sobriety. He was jealous and possessive and did whatever he could to interfere. Everything came to a head one night when, in a drunken rage, he hurt me in a way he never had before. Although traumatized, I got a protection order and finally filed for divorce.

I had a lot of amazing, supportive friends, but Joe was one of a kind. He was kind and generous with a strong faith in the Lord and the first man to treat me with genuine respect. We sat next to each other in meetings for 5 years and became best friends. He helped me a lot after I separated from my husband. Before long, our friendship caught fire, and we were very much in love!

The Power of Prayer

In 2015, smoking and lung disease caught up with me, and I almost lost my life. I quit smoking. After undergoing treatment for Hepatitis C, I was diagnosed with Rheumatoid Arthritis in 2016. I spent the next year heavily medicated and in extreme pain. One day, I recalled a scripture from a Bible study I attended a few years before. It said, “Therefore I tell you, whatever you ask for in prayer, believe that you have received it and it will be yours,” Mark 11:24. That was a game-changer. Six weeks later, I was pain-free. By January of 2018, my blood tests and x-rays showed no sign of RA, and I was officially cured.

This past summer, I got sick again. The lack of cardio from being cooped up caused my lungs to become congested. I also was depressed. Once again, I recalled that scripture and thought to myself that if God could remove RA from my body, He could remove the COPD as well. So, I gave it to Him. That very day, I began telling anyone who would listen that I was actively recovering from COPD, and by August of next year, I would be completely healed. Three weeks later, I felt like a kid again. It was amazing! On October 12, at my annual pulmonary function test, my results shocked everyone. My lung capacity had increased from 52% to 72%, allowing my doctor to change my COPD classification from severe to mild! Never underestimate the power of prayer!

Ministry to the Unloved

Dedicated to our sobriety, Joe and I are very active in the 12 Step community and our local community. Our motto is “Trust God, Help Others.” We do everything we can to live up to that. With the opiate epidemic raging and being personally affected, we do what we can. We use our own experience to reach as many as possible. In February 2011, we started a 12 Step program geared specifically to those seeking recovery from opiate (heroin) addiction.

A year later, we started a support group for parents, family members, and loved ones of addicts called H.O.P.E.: Help for the Opiate addicts Parents Exists. Drawing on our experience as parents of a recovering addict and our own experience with alcoholism/addiction, we support parents through the rollercoaster of their child’s addiction. We help them see how enabling behavior is harmful, provide them with resources to get their kids into treatment, and offer a safe, non-judgmental place to cry. Recovering addicts share their stories, often giving parents suggestions about what worked for them. Recovery is possible! We have seen miracles happen, and we are dedicated to helping as many people as possible get there.

People say we are “a ministry to the unloved and unlovely.” I’ve nursed addicts through detox and distributed drug tests and Narcan. I’ve spent hours in the ER, prayed at bedsides, and attended more funerals than I ever thought possible. God has shown me my calling.

Training for Chaplain Minister at CLI

After my first husband passed away, I remained close to his parents. His mother already went to be with the Lord. Then, in 2014, his father received a dementia diagnosis. He didn’t want to leave his home. So he asked if I would bring Joe and our boys and move in with him. What a blessing! This move also afforded me further training for a Chaplain minister.

I want to spread the good news about what the Lord has done for me by sharing my experience, strength, and hope. I also want to be able to bring comfort to people who are going through difficulties. With free ministry training at Christian Leaders Institute, I will be better equipped to do that. My goal is to become a Chaplain Minister. With the training for a Chaplain minister at Christian Leaders Institute, I can actually envision myself reaching that goal.

Dad’s dementia has progressed to the point where he can no longer be left alone. It gives me the time I need to reach my goal. I’m also very grateful to my Mom for bringing Great Grandma to live with us. She did an amazing job, and through her example, I was able to gain the experience I needed to care for Dad. God is good!

Online Bible Classes for Free at CLI
Scroll to top