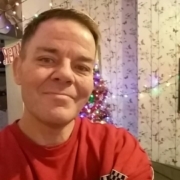 Hi, my name is Stewart Kitchen. I’m 47 and from Sheffield, England. I was saved on April the 5th, 2020, at the beginning of the UK lockdown. I came to Christ through finding an online church service run by Soul Church of Norwich, England. Then, on August 9th, 2020, I found a local church, Hope City Church of  Sheffield, that was also doing online services. They asked me if I wanted to do an Alpha course. I didn’t know what it was, but out of curiosity, I said yes. Now I am 8 weeks into the course. After a couple of weeks of the course, I realized I wanted to know more. That is when I searched for free online Bible classes. I found the Christian Leaders Institute and took the Getting Started course (Learn more about online Bible classes, Click Here).

About myself, I wasn’t born into a religious family. In fact, my dad hated anything at all to do with religion. My parents divorced before my third birthday due to alcohol and violence on both parts. So my dad moved into my grandparent’s house with my younger brother and me. My dad still struggled with alcohol while holding three jobs down and suffering from depression. Therefore, care of me and my brother Chris fell to my grandparents, Edna and Bill. I was a very rebellious child and even worse when I became a teenager. My dad once called me Satan’s second. I was not too fond of school, and arguments between my dad and me got more and more regular.

At the age of 15, I moved out and was taken into a hostel for homeless teens. While there, I got into drugs. Amphetamines and cocaine were my choices of party drugs. What I used every day were cannabis and alcohol. Soon, I was heavily addicted to cannabis. I dropped out of school, so I never received any GCSE grades and couldn’t get a job. I took to burglary or muggings to feed my habit.

While in the hostel, I got into more and more fights. Therefore, at the age of about 19, they asked me to leave. Then, I was back on the streets. I went to the benefits office to see if they could help. They said they could, but there was a catch. I had to do a training course on care for the elderly. It was ironic since, first, I didn’t care about anybody but myself, and second, these were the type of people I robbed not a week earlier.

However, I started the course run by two church leaders, Ken and Christine Tooze. While there, I met a young woman, who gave me a place to stay. After a while, we started a relationship. She got pregnant, but sadly, he was stillborn. This event started me on a downward spiral into heavier drinking and daily use of cannabis. I wasn’t eating and was on a self-destructive path. On May 5, 1993, I attempted to take my own life. I woke up in a psychiatric hospital and stayed there for a while.

After my release, I married the young woman I lived with. However, we could not get over losing our son. Later, we had two daughters. Sadly, it was too late as the rot had set in. After five years, we divorced. Later, I married another woman, and we had three more children. However, my selfish attitudes, drug and alcohol addictions, and the fact that she liked using her fists to solve problems soon led to a second divorce.

At this point, I was deeply into witchcraft and the occult. It would take me down a path of pagan worship, sexual deviancy, and more. But I didn’t care. The further I got in, the harder it was to get out.

In 2006, I moved to Norwich, where I found Lorna a regular churchgoer. The second I met her, I fell in love. However, she believed in everything I was against. So, I threw questions at her: “If God cares so much, why did my son die?” and “If God is really the creator, why did he create us with so much evil in our hearts?” The big question was, “Why doesn’t God do something about the suffering in the world?” I slowly introduced her to my beliefs. Eventually, I convinced her to quit church.

Not long after that, we married. For the next ten years, we lived in a kind of haze. I got Lorna addicted to cannabis, and nothing seemed to go right. In 2014, we moved back to my hometown of Sheffield and carried on our fogged existence. Then the Covid 19 pandemic hit the world. We locked down, and the only thing to do was troll the internet.

While looking online, I came across an online church service that ironically was being broadcast from Norwich and was the church that Lorna’s family attended. A pastor by the name of Jon Norman was preaching the gospel. In particular, he talked about it never being too late to be saved. So I carried on watching, and halfway through for the first time in my life, I started crying. Even when my son died, I didn’t cry. But this skinny preacher man caused me to sob uncontrollably. He ended the service with the salvation prayer, which I repeated over and over again.

A New Direction and Free Online Bible Classes at CLI

At the time, I didn’t know why I cried or why I felt about ten stone lighter. Drugs were still an issue, but I felt somehow different. I carried on watching every service every week. While looking in my own community, I came across Hope City Church Sheffield. They invited me to do the Alpha course with them. They taught me about prayer and the Holy Spirit. In fact, they prayed recently that I would be filled with the Holy Spirit and cleansed of all addictions. It was as if someone had plugged me into the national grid. I couldn’t stop shaking and had to hold my seat in fear of floating off. I talked in a sort of babble that made no sense and thought I was losing my mind.

The next morning, my craving for drugs was gone! God had truly done as he had promised! Through Jesus Christ, God saved me. Three weeks later, after a crazy dream, I woke up and told my wife that I think God is calling me to the ministry. She said, “You know, so do I.” That is when I found the Christian Leaders Institute for free online Bible classes.

Training for Chaplain Minister at CLI

Educational Christian Classes for Free at CLI
Scroll to top