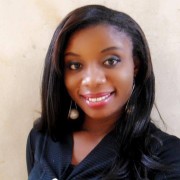 My name is Rebecca. I’m blessed to be called of God to fulfill His purpose on the earth. I would say my Christian journey began when my parents received the Lord Jesus as Lord and personal saviour in 1988 (I was only 2 years old) after being Muslims. They make it a duty to bring us up in the Lord according to biblical principles. My siblings and I became adapted to a daily devotion with our parents in worship and Bible studies. In 1992, my parents became committed members of Foursquare Gospel Church where they both received the baptism of the Holy Spirit and water baptism. At age 6, I decided to respond to an altar call to receive Jesus as my personal Lord and Saviour. My faith in the Lord increased based on what my parents taught from the Bible and the wonderful testimonies I heard in church. My mom became an intercessor and deliverance minister and I would see her get involved in intense deliverance sessions, setting the afflicted and demonized free through the name of Jesus. I would say, seeing my parents get so involved in the work of the Lord through missions, pioneering churches, intercessory ministry, my faith in the Lord grew.

In 2003, I left home for a diploma program in Computer Science at Edo State Institute of Technology and Management. As a fresher, the first thing I could think of was finding a good Christian fellowship. I did find one and I began to experience God in a whole new level. I could see youths with a burning passion like I never saw in the city. I joined the choir and also became a leader. I received the baptism of the Holy spirit and gift of prophecy. I began to learn to discern and to receive inspirations from the Lord. I also became open to a heavy warfare. The Lord also began to speak about his intentions to use me for ministry. I also saw the Lord help me achieve excellence in my studies.

For the past ten years, my life has been about tests, trails, sufferings, deserts and wilderness experiences. I am glad the Lord has taken me through the process of humbling me and giving me an understanding of spiritual warfare and life generally. My sufferings led me to be closer to the Lord and to hear His voice more. Although, i have been tempted to give up, yet I have faith that giving up is not an option.

I do hope to see God’s plans fulfilled in my life. I’m glad to be a student here.