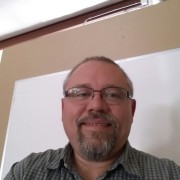 My name is Pastor Ray, and I live in the U.S., in Missouri. I am so blessed to be a part of CLI, even though I do have a seminary Masters in Bible and Theology. I’ll explain why.
I accepted Jesus Christ as my Lord and Savior back in 2003 and told my wife and family that I would follow Him wherever He led me and do whatever He called me to do. Still will today, of course, but I didn’t know what that would look like back then at all.

In 2006, we moved closer to Kansas City, and I began to teach at Wright Business School in Business Computing, Keyboarding, and Software Applications. I also began to live out my faith and saw it come up against some enemy-filled folks out there. By His grace, I not only survived, but actually, that’s what drew me to seminary training, and in 2008 I graduated!

However, and this is one reason I will cherish CLI for sure, I didn’t realize that seminary quite often doesn’t prepare you for REAL ministry. And it certainly doesn’t often have mentoring or discipleship as its focus in your preparation for ministering to others. Actually, in my personal experiences, my seminary didn’t give me much of anything other than great study habits and a lot of head knowledge (not that it was at all useless, by the way) and some sense of my own personal accomplishment. Somehow during the whole process, God got left out, and my own “work” got done.

Oh sure, I called it the Lord’s work, but, in reality, it was just more schooling, only this time it was “for and about the Lord”. It turns out that a few years after I graduated and began teaching Bible in a Christian school, that the Lord showed me that although that knowledge was a great thing, and I still cherish it, that ministry was so much more than just “knowing about Him”. You have to “know Him” (experience Him) for yourself and then begin to learn to invest that into others.

As I’ve read testimonials over and over again at CLI and even spoken at great length in person with one of your graduates and a ministry partner with me now, I can’t wait to “experience” the presence of the Lord in your courses!

I hope everyone who reads this will become significantly encouraged that, just because it’s free, doesn’t mean it’s second-rate. And, because it’s free, we have an obligation as believers to support each other and the future leaders who come to CLI! Also, free doesn’t mean to blow it off, folks, trust me. I’m proof that you can blow your time in seminary anywhere and just “get a degree”, but TRUE mentorship-level, discipleship-level training that’s free…..WOW, what a treasure! Thank you, CLI!

REBECCA EDMUND – Closer to the Lord!
Scroll to top