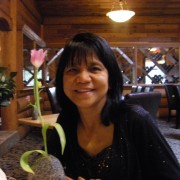 My name is Aurora Caparas, I was born in the Philippines to a family with a strong Catholic background. We learned religion during our elementary school years. We were taught about heaven and hell, so I strived to always be good, because I wanted heaven as my eternal destiny. I believed in God and so I was always striving to be close to Him. I thought that if I said the rosary and did what was right in the sight of man, it would accelerate me to heaven. God who is an all-knowing God saw my heart and began drawing me to Himself.

One time while on my way to school I read a flyer inside a passenger’s jeep which said, “Have you been born again?” I was puzzled, it became a deep question in my heart. I wondered how can you be born again when you are bigger than your mother’s womb? My desire was to know God however, so I went to mass every Sunday.

I worked and studied at the same time. One night, as I listened to a radio program, I heard the song “I Will Carry You.” The song said, “There is no problem too big that God cannot solve it.” This song touched my heart, it was the first time a song ministered to my soul. It was my earnest desire to be a part of that radio station, especially when I heard them praying for different families. After that, God began to move speedily in my life. Someone invited me to a Bible study in our office, I joined immediately, they were Baptist. One person gave me a Bible and I read the book of John. I could feel God strongly talking to me in His Word. That was the turning point of my life.

I was hungry for the Lord and wanted to know more about God, to experience a deeper relationship with Him. The Lord Jesus began to reveal Himself to me in dreams. In one of my dreams I saw a big, tall man wearing a white robe holding a book in His hand, He was in front of me while there was a countless number of people behind me. This man went ahead of me and entered into a narrow gate only wide enough for one person to pass. As I followed Him, He led me into a narrow path, a good path, but after a while it was a dark road and I could no longer see Him anymore. However, I kept on walking because I longed to see Him again and eventually, I came to a very beautiful, bright, and joyful place.

After a few weeks, I became a leader of one of the ministries in the church. Then I was transferred to another ministry called, Cell Outreach Ministry. I was the overseer and after two years the ministry became the most fruitful outreach in the church. After this I got the heaviest trial of my life, my husband was kidnapped and murdered. I was left with the responsibility of our three children and experienced many trials. I praise God though who didn’t leave me alone, but caused me to rise in victory and faith! Hallelujah!

It has long been my desire to have deeper training, I have earnestly wanted to know more about our Lord Jesus. I tried to enroll in a Bible school but the tuition fee was too much for me as I have a menial job with a minimum salary. I believe CLI is my answer from God to this deep longing. I was so excited when I heard about it that I enrolled immediately. I have volunteered for many years to serve God in His kingdom. I have also been involved in the mission field. My desire is to plant a church and to be mightily used by God all the rest of my life.

I thank all the gifted teachers here who have a willing heart to train disciples and leaders to fulfill the great commission. Recently, the Lord Jesus gave me another dream about His second coming: I was in a very big building crowded with people when someone called me to come out. So I came out and followed him. When we got to a place not very far from that huge building, he told me, “All prophesies must be fulfilled,” then he pointed towards heaven and told me to look up. When I looked up to the sky, I saw very bright clouds which began to open and then I saw Jesus coming down. The Lord gave me a verse in Rev. 1:7 “Behold, He cometh with clouds; and every eye shall see Him, and they also which pierced Him: and all kindreds of the earth shall wail because of Him. Even so, Amen.” and Luke 21:36 “Watch ye therefore, and pray always, that ye may be accounted worthy to escape all these things that shall come to pass, and to stand before the Son of man”.