In the book of Hebrews in the Bible, the final chapter (13) we find these words,

11 The high priest carries the blood of animals into the Most Holy Place as a sin offering, but the bodies are burned outside the camp. 12 And so Jesus also suffered outside the city gate to make the people holy through his own blood.13 Let us, then, go to him outside the camp, bearing the disgrace he bore.14 For here we do not have an enduring city, but we are looking for the city that is to come. 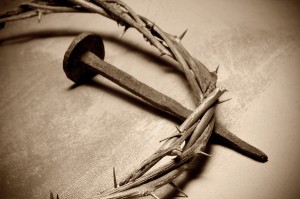 Today as we listen to what the writer of Hebrews tells us about Jesus, we need to realize that Jesus is a man who was ostracized in order that the community he became a part of might be set free. He is the one who takes the guilt of all the others upon himself and he deals with it by paying the price that was on all the heads of the community he represented. In a North American idiom, Jesus becomes “the fall guy” for the world.

Each year in the Jewish calendar of the Old Testament times, as Yom Kippur (translated Day of Atonement) came around on the tenth day of the seventh month, the nation would gather and a very solemn assembly would be held. There was a very carefully prescribed ritual that was followed on Yom Kippur. First, the high priest would offer a bull in sacrifice for his own sin. Then he would take two goats and present them before the Lord. By casting lots, he would choose one of them to be killed in sacrifice and the other would be kept alive as the scapegoat.

Next the High Priest would sacrifice the goat along with a ram and take the blood of the bull, the ram and the goat, and he would go by himself into the Most Holy Place, the very sacred place in the inner temple area where God “lived” on the Ark of the Covenant. And there he would sprinkle the blood of the animals on the mercy seat. When that was accomplished, he would come out and again in a careful ceremony, he would lay his hands on the head of the living goat and confess all the sins of the people of Israel. Then a man who was appointed to the task would take that goat out into the wilderness to be let go. It was expected that the goat would die there outside the camp. The wonderful thing about it was that the goat symbolically carried with it all the sins of the people which had been confessed.

Then in the final ritual of the day, the priest would take all that was left of the sacrificed animals, and bring the remains outside the camp and there he would burn them. And in this way, God was teaching his people to see and experience the blessing of having all their sins forgiven.

That was the event that was in the mind of the author of Hebrews as he penned these words to the congregation to whom he was writing. He wanted them to see in their minds the fact that Jesus was the fulfillment of all that God had intended for the people in the annual Day of Atonement.

He pictures for his readers, and for us, what happened on that day when Jesus was crucified. For on that day, the one who knew no sin, was condemned as a criminal. He was declared by a political ruler to be not fit for human society. He was cast outside the camp—outside the city, there to die. And even though his condemnation may be seen in any number of ways—a great tragedy of misguided jealousy on the part of the Jewish leaders, an act of political necessity by an unjust judge named Pilate, an awful act of a miscarriage of justice. However you may want to see it, however you may want to describe it, the writer to the Hebrews says, I have a vision of that day which needs to make its home in you. But this time, instead of a goat being led out into the wilderness with your sins on its head and then the animals being burned outside the camp, the author says to you and to me, see in your minds a vision of Jesus being led outside the city and there being crucified. All your sins were laid on his head. He is the scapegoat. In that vision you have a picture of what it means to have one who was innocent bear the sins of your life. He took them outside the camp and there they remain. You carry them no more.

The blood of Jesus is sprinkled on us like the blood of the animals was sprinkled on the worshipers at the great assemblies of the Old Testament people of God. The blood of Jesus is given to us in baptism to show us that we no longer carry our sins, but we are set free from them. God has acted in our lives and we are washed in the blood of the Lamb, we are cleansed in the blood of the scapegoat of history, Jesus Christ. We are set free by the blood of the one who bears the guilt of our sin — of our loving ourselves more than God, of serving ourselves rather than the great King. Of being totally convinced that we are the center of the universe and all that exists, exists for us. All the various ways we have offended God have been taken up by the one whose name is Jesus.

That is why the church throughout history as we stood before the Lord and said, I believe have always included from the very earliest of times the words I believe in Jesus. Oh, I believe in Jesus. As Carl, one of our students at CLI says, “It wasn’t until my mid-forties, after a succession of devastating personal, familial, financial and professional blows did I finally and unequivocally repent, state my belief in Him and ask Him to take charge of my life. From that day forward, I can say that I have a personal relationship with Jesus that sustains me and that I cherish above all else. I know that I am truly a child of God…” There is something about that one Name that, when we come to know that person, everything changes. We are from then on, children of the Most High God.

Brian Govender of South Africa – Featured Student of the Day