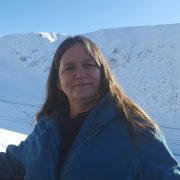 My name is Karey Gaston. I am receiving ordination training and ministry training at Christian Leaders Institute. I am 56 years old and currently live in Big Lake, Alaska. I have been married 35 years to my wonderful husband Ralph. We have 3 beautiful daughters, 3 awesome son-in-law’s, and 4 granddaughters. I was born in Fairbanks, Alaska and raised in the North Pole area. My husband and I met in Golden Colorado in 1980. Within a year of meeting, we moved to Alaska and have called it our home ever since.

I was raised Episcopalian but my family was never really active in the church. At 16 years of age, I became curious about God and started searching for a church. I was saved and baptized at a local Methodist/Presbyterian church at age 17, but had no one to disciple me. After being accepted into the Colorado Institute of Art at age 18, I moved to Denver. At that time, I was not walking with the Lord. It was not till 1986 when my husband was born again that I re-dedicated my life to the Lord. We were very active in church and the word of God but both were still struggling in our walk.

In June of 2002, after a spell of about 8 months of not going to church, my daughters asked me to start taking them back again. Within 2 weeks of attending church, I had a moment at the altar that I feel changed me for life. I once again re-dedicated myself to the Lord and became so desperate for His love that I truly laid my life down on that day. My husband was not at a point to come back at that time, so it was a struggle. But I just kept pressing into my relationship with God.

By August of 2002, I found a local church to be my home. In 2003, my husband was arrested and went to jail for 5 ½ years. I went through the darkest time of my life but never felt alone. I sensed that God wanted me to stand by my husband, and I did. He surrendered his life over to the Lord and began walking with Him right where he was within the prison system of Alaska. In 2005, I was introduced to a ministry that was starting out up here called Blood ~N~ Fire Ministry of Alaska. I felt led to become involved but had no idea of what God wanted me to do. In faith, I stepped out.

Our mission was for the poor and broken-hearted to feed, clothe, and find shelter for them. We started out delivering food and clothing for families in need. Within the first year, I became the Secretary/Treasurer. The following year, I became President of the Board of Directors. This is a position that I held until October of 2014. At that time I stepped down to take on the Executive Director position of which I am currently serving in.

Blood ~N~ Fire Ministries serves our community with a Food Pantry helping an average of 600 families per month. A Clothing Pantry dealing strictly with new clothes serves 50 families a month. Our program, The Knik House, is a Christ-based transitional housing program currently serving 23 men, 10 women, and 5 children. We are supported mainly by churches and individuals support.

In January 2014, my Board of Directors voted to have me ordained as a pastor for this ministry. I was surprised that they could see me in such a position. Through prayer and seeking the Lord, I realized that He has called me as a pastor. I have been working within that gifting for the last 7 years. I spent some time researching online possibilities that could work with my need for on-the-job training. I soon realized that I was lacking a strong knowledge of the Word of God. That is when I found Christian Leaders Institute. At the time I started, CLI was not doing ordination training but I understood my personal need for a deeper foundation. So I decided not to concern myself with being ordained. After 3 months time, CLI began offering ordination training so I was able to begin moving in the direction necessary to properly equip my calling.

Our local church has supported us financially and spiritually for the last 11 years. The ministry started under the Crossroads Community Church umbrella in 2005. We became our own 501c3 in 2007. The outreach that we had in our community allowed us to reach out to many people that would not attend a church or had been victims of past hurts.

My mentor, Sondra Markwardt, looked up the CLI curriculum to see if she felt that it would be a good fit for me. Sondra is a recognized leader, a pastor, and the wife of Pastor Phil Markwardt, my pastor for over 11 years. Phil is now a Chaplain for our local prison system. After Sondra’s consent, I decided to move forward with the studies provided by CLI.

The ordination training and ministry training that I have received from CLI has been life-changing in how I am able to minister to clients on a daily basis. My knowledge and hunger for the Word have increased greatly. I would not have been able to accomplish this without the availability of such online training. I was able to move at my own pace while working 2 jobs at the beginning of starting this schooling. For this, I give you my gratitude.

In closing, I ask for your prayers for the purity of heart, the oneness of mind and spirit for our Board of directors, staff, and volunteers. Please pray for the wisdom of the Lord for continued expansion of this ministry and outreach. And most importantly, that we would continue to be a light within our community, and beyond.