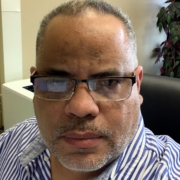 My name is Ernesto Mojica-Álvarez, and I am receiving free Bible School training at CLI. I was born in San Juan, Puerto Rico, a beautiful small island in the Caribbean. However, I am now living in the state of Indiana, USA.
I have held different hats throughout my professional life. Currently, I am a Human Resources Director for a Law enforcement department. I’m also a Mental Health Counselor and an Organizational Psychologist.

Most importantly, though, I am a husband of 25 years to Arlene Mojica, my high school sweetheart, and I am a father of two: Jonathan (24), and Paola (22). My wife and I are also active members of the New Creation Ministry Church in Highland, Indiana. We have taken the challenge to develop a lay counseling ministry for the kingdom of Jesus Christ and the Church.

Like many who were born in Puerto Rico, I was raised mostly with a Catholic background. In Puerto Rico, nearly 85% of the population is Catholic. The other 15% is divided among Protestantism, Islam, and Judaism. But for the most part, I was raised as a non-practicing catholic.

When I was around 22 years old, a friend of mine invited me to a protestant church. I did enjoy the service but never returned. Even though a seed was in me, I was lost in the world, living a secular life. I did not see anything wrong with it. I thought religious people were the ones who were kind of strange. When I think about it now, I believed in the existence of a Higher Power, but never considered one true God and Savior Jesus Christ. The good news is that God always finds a way. He left the 99 and found me.

It Took a Higher Power

On September 20th, 2017, a Higher Power showed up. A Category 5 hurricane named “Maria” with constants winds of over 155 mph devasted Puerto Rico. Maria was the strongest storm to impact the island in nearly 90 years. Over 3,000 people lost their lives. Some other statistics raise that number to over 4,000. It caused over $90 billion in damage to infrastructure and the economy.

In the struggle of the crisis, trying to keep myself at ease and to protect my family, I prayed — something I have not done, purposefully before. I prayed for God to show me the way, and He did!

A few months after living in a struggle, even for basic needs, we re-located to the state of Indiana. With the help of a long-time friend and his Christian family. On December 1st, 2017, we arrived. God was good to us all the time. My wife and I want to say thanks that our prayers were answered.

Through our friend’s invitation, we visited a Baptist Church called New Creation Ministry. We find peace, friendship, and a real Christian community. We felt welcome. As we matured in our faith in time, we both were baptized. I cannot say we found our Savior. It is the other way around. He found us in the middle of the storm.

Now, I am here at Christian Leaders Institute to learn more about God and the Bible. The free Bible School training at CLI is a blessing. I look forward to what God has in store for me in ministry.