Fishing is a hobby I enjoy. I have, over the years, been able to find time to go fishing even if things were rather busy for me. It is a relaxing, meditative time. I can be quiet and calm, and enjoy the creation as I wait for the fish to bite on my hook. As a proverbial little saying puts it, “A bad day fishing is still better than a good day at work!” Here in my region of the world, we are just coming on toward spring. The lakes are thawing from their winter ice cover. And, below the surface of the lake, the fish are getting ready to spawn. So, here in Michigan, we have rules about when the fishing season opens. One cannot disturb the mating of the fish or they will soon be depleted by over-fishing. But, that does not stop us fishermen from looking forward to the day when the fishing season opens for us to pursue our hobby.

Called to be a Fisher of Men 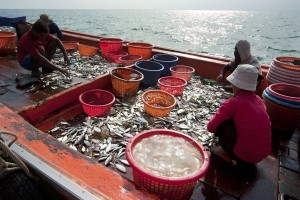 I know that some of you who are reading this are fishermen by trade. You earn your living at fishing. Fishing, for you, is much more than a hobby to be occasionally engaged in – it is an everyday endeavor. In those terms, you are much like some men I read about in the Bible than I am. We know then as Peter and Andrew, James and John. These are the first men that Jesus called to be his disciples.

The story goes like this (see Matthew 4). Jesus had been subjected to a period of temptation by the Evil One in the wilderness. Upon returning from the wilderness, Jesus heads to the area of Palestine we know as Galilee. It was the geographical area in which he had been raised. His hometown of Nazareth was found there. It was also the place where there was a large inland lake called the Sea of Galilee.

The sea is formed as the Jordan River runs south from the hills to the north. It enters a large area where it flows slowly in the currents of the 64 sq miles (166 sq km) of the lake. What is interesting about the lake is that it is nearly 700 feet (210 m) BELOW sea level. The Jordan River takes up its course again as it flows south from the lake to finally end up at the Dead Sea. The Sea of Galilee is a place where, in Jesus’ day, a flourishing fishing trade was found. The ancient historian Josephus tells us that 230 boats were regularly out on the lake engaged in fishing for a living.

Among them were two boats owned by the brothers Andrew and Peter, and the brothers James and John. One day, as these men were washing their nets at the water’s edge, a man came along and simply said, “Follow me, and I will make you fishers of men.” What happened is that these guys to whom very few paid any attention in the religious world, these guys simply left their boats and followed Jesus to become fishers of men. These men formed the heart of the group of disciples of Jesus. They as men trained to be fishermen, would become the great leaders of the church as it was born. One could almost say that Jesus and these men formed the first edition of Christian Leaders Institute!

Jesus took people as they were and trained them to be the leaders of his church. He did not ask them for a payment of tuition. He carefully taught them the truths of God. He sent them out to practice. Then, when they came back, he went over how things had gone for them in their efforts to put into practice what he taught them. Their training often centered in the towns around the Sea of Galilee, so they were not asked to relocate to a different area hundreds of miles away.

The way Jesus worked is still going on today. At Christian Leaders Institute, we are discovering how many people are busy in an occupation when Jesus comes along and gives them a new vocation (a calling) to be a person who is a fisher of people. Listen to one of our students,

I am Roslin Marcelus. I was born in Haiti. I am married and father of three. I have a degree in automotive from the New England Institute of technology and a Bachelor of Science at the University of Bridgeport. I have a Master’s degree in Global Development and Peace. I have also earned a certificate in human resources management.

When I approached the Christian Leaders Institute website to start learning about ministry, I did not have in mind that it would be a hands-on training opportunity. I was offered a way to personally improve my relationship with God. Now I am starting to understand my mission. I want not only to serve God but to be able to be an instrument that helps others come to know the Savior, Jesus Christ. The Year 2014 will a new beginning as I pray the Lord to guide me to the next step.

So here is a man who is busy at his occupation and along comes Jesus and calls him to become a fisher of men. It is a great privilege for us all as the staff of CLI to be engaged in doing the training which is needed for these individuals to become the best servants of Jesus they can be. Here they learn of their mission as Jesus calls them, not to give up their life’s work, but to see it embellished with the added joy of going fishing!