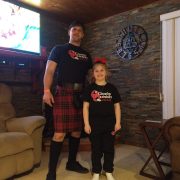 I am Ryan Crawford and I am feeling called to be a fire department chaplain. I am writing this in an effort to inspire those who may want to have a role in ministry. I was born in the mid-1980’s in upstate New York to a young couple out of wedlock. My mother’s parents and other family were devout Catholics and frowned upon it. However, they were relatively liberal about the idea of their daughter having a child while unmarried. I was baptized Roman Catholic and grew up going to the Catholic Church with my grandparents who were heavily involved with their local church.

Then tragedy struck. At about 5 years old, my mother left my father due to him being an alcoholic. My mother and I became “nomads” moving from place to place and finally settling in Eastern Pennsylvania. My mother and I rooted down and finally had a place to call home after chaos for several years. We went to church here and there, mostly on holidays, but we kept our faith and she taught me about God and Jesus. A few years later, my father who was threatened to never see me again, chose to put down the bottle and my parents reunited.

Fast forward to my teenage years. My parents weren’t happy with the ways of the local Catholic church and their congregation so we began “Church Shopping”. We tried the Baptist, Methodist, Evangelical, etc. until we stumbled upon the Lutheran Church where we fit, perfectly. I received my confirmation and attended Sunday School and was at every service for years until we moved and I began my employment as a teen getting ready to get my driver’s license. I worked and worked and worked and I never stopped. I stopped going to regular church services due to my work schedule, but, my faith stayed strong.

I then met a girl in high school. We started an on again, off again relationship my senior year which continued several years after school. We too then had a child out of wedlock. The apple doesn’t fall from the tree in some aspects. We then ended our relationship due to infidelity and went our separate ways with joint custody of our daughter. I questioned God as to how this could happen, yet, my faith never wavered. My work schedule continued to keep me out of regular church services. I had also started in the volunteer fire service at the age of 14 and began to see the dark side of life that most people do not have the advantage of seeing. Death, evil, danger. Maybe not the best thing for a teenager to see. I furthered my experience as a part-time paid fireman at the age of 19 which I still do, however, the years in between, I furthered my education, training, and experiences to Emergency Medical Services (EMS) where I saw even more death.

Fast forward to today. After seeing friends, family and patients take their last breaths which made me think: What have I done with my life? Are they going to Heaven? Am I going to Heaven? What can I do to be closer to God and Jesus? What can I do to help my friends and family be closer to God? My goal now is to further my education in ministry and faith here at Christian Leaders Institute. I want to become a Fire Department Chaplain to fulfill my service to my fellow man and my God.