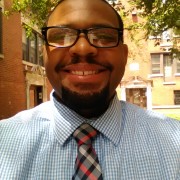 There is a City of Chicago Ministry Training option available to those called into ministry. This option is free and effective in reaching people for the gospel.

My name is Samuel L Sprewer II, a 35 year father of five and engaged to a wonderful woman, residing in Chicago but originally from Milwaukee. The city of Chicago is truly suffering right now from the violence that plagues the city daily and is in dire need of a spiritually reawakening and a fresh wind from the Holy Spirit.

My spiritual journey began when I was very young when my grandmother use to take me church. I grew up in a baptist church where I was introduced to some foundation teaching but never really having the understanding of what salvation was or the work that Christ did on the cross. I can recall around when I was thirteen years old that my pastor approached me and told me I think it’s about time you become a member of the church. So I joined the church and was baptized. This was just the beginning of my spiritually journey and I just didn’t know it. It wasn’t until I was twenty years old and I attended a bible study with my brother that I truly felt the presence of God. It was at this time that God spoke to me and instructed me to leave the church I had been attending and begin attending my brother’s church.

It was there that I received the spiritual foundation that I had been lacking. In the year of 2002 I received the call from God to preach the gospel. My first sermon was “What Profited a Man to Gain the Whole and Lose his Soul.” Overly zealous and still young in my calling, I wanted to be the “popular preacher” that everyone received. But that was the plan God had for me. The word that God put in my mouth was the word that challenged a person where they were at with their walk with God. I then went on to get ordained as an Elder. I’ve held the positions of Youth Pastor, Assistant Pastor, and Co-Pastor. I soon found myself falling away from the faith because I had no real relationship with God anymore. I got divorced in 2014 and found myself spiraling out of control.

Although I keep God in the back of my mind, the only thing that mattered now was appeasing my flesh and fulfilling my lustful desires. Just recently, I fell under the mighty hand of God where I found myself at death’s door. I had a sever asthma attack and found myself under heavy sedation and on a breathing machine with my life hanging in the balance. No one knew whether or not if I was going to live or die. But the people constantly prayed for me. It was on a Monday, and my breathing tube became clogged, I woke up out of my sedation because I could not breath. Had the doctors waited until Tuesday when the tube was suppose to come out, I don’t believe I’ll be here today. I ended up extubating myself. While in the hospital God spoke to me and said, ” If you continue down the path you are on you’re going to die.” It was at this moment that I choose life and rededicated myself back to God.

My ministry dream is to have a nation wide revival, calling those that are lost and those who left God to turn back to Him. This nation that I currently stay in, the United States of America, is a godless nation with no reverence for a holy God and every damnable thing is accepted as right. I believe God called me to be an end time prophet to warn the people of the impeding doom that the nation is facing if they don’t turn their faces back to God.

A scholarship at CLI will help me in pursuit to have a rooted foundation so I can as it is stated in II Timothy 2:15- Study to shew thyself approved unto God, a workman that needeth not to be ashamed, rightly dividing the word of truth.

Ministering to Young Women – Get your Training!
Scroll to top