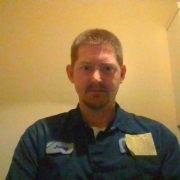 My name is Jamey King and I am on a Christian training journey with my Lord which has led me to CLI. I was born and raised primarily in the small town of Athens, Alabama, USA. My parents were divorced when I was very young. I have only a few memories of them together. My biological mother gained custody of us. She struggled to support us sometimes working three jobs at once. She remarried a very abusive man. They both used drugs, so it was an unstable life. My sisters and I learned first hand what severe abuse does to a child and the path his or her life takes. This abuse started a pattern for me of thinking that I was very bad.

My father fought to gain custody of us. My older sister moved in with him first. My mother did not want the trouble that came with a very hyper nine-year-old son. So she just packed my stuff and took me to him. She ran to Mississippi with my younger sister but was finally tracked down. My sister went to foster care for a while but was eventually placed with my dad too. Our life there was unstable at first, but I remember feeling safe. I loved hunting with my dad and the attention he gave me.

Then my dad remarried, and we had two younger sisters added to our family. There were five of us kids in all, four girls and one boy. Life became stable then, but my dad grew very stern and often violent. I believe he set out on the path of raising normal, capable adults. Unfortunately, we were not normal since we had suffered severe abuse earlier in our lives. Because of this, the home became very unhealthy for all of us.

My father did not hold to the teachings of the Bible. He grew up with an abusive father. He was in the Vietnam war, and he believed in a military type discipline. He destroyed all of our confidence and self-image to make us driven. All of us were driven, right out of his house. No matter what we had to do, all of us worked to become independent. We all went in different directions and began our own families.

I moved out with a friend. We rented a house, and the party life started. This part of my story is hard to tell, so in short, I slept with a woman for all the wrong reasons. But out of that, the Lord created a beautiful daughter’s life. I was young and immature and could not get along with the woman. We went back and forth in a very toxic relationship until she found someone else. I have been in and out of my daughter’s life over the years. We kept it from her mother because she has a severe hatred of me.

Soon after that relationship, I met my wife of twenty-three years now. I needed someone who was gentle, loyal, and safe. I found that in my wife. We soon had a son. I was a proud father, but life changed, and I didn’t. I still wanted to hunt, fish, and run the roads. But that didn’t work. My wife went back to work on second shift. I worked days. Her parents helped watch the kids in the evenings so I could hunt and fish some. I never was much of a drinker or had anything to do with drugs before this time but sitting at home all the time was not good for me. I started drinking every evening.

I found a job in maintenance on the 3rd shift and started going to school full time during the day. Four years later, my daughter was born. I was in construction as an electrician by this time. Drugs were available everywhere. I found pain pills/opiates, and it was all downhill after that. The next chapter of my life dealt with jails, rehabs, and hospitals.

I was not raised in the church and did not have a personal relationship with the Lord. After many years of failing to get sober, I began to study the Bible. I wanted the Lord to come in my life, but addiction had a solid hold on me. I wanted a better life for me and my family, but I did not see how giving up the desires of this world could make me happy. I was selfish.

On February 18, 2016, I gave up and surrendered. I decided I would do my very best to follow God’s words, commandments, and convictions. So I gave my life to my Lord and Savior. I got a new boss. My life began to change on my Christian training journey. I put filthy language off my lips. I became honest. I started a routine of getting up, praying, taking my shower, then going downstairs and reading my Bible while having my coffee. I would usually watch a Dr. Charles Stanley video or something spiritual before work.

The Lord has blessed me immensely. My wife and I now have a very stable and Christian life. My routine has been to read the Bible every day. I now want to learn more on my Christian training journey. I want to serve the Lord better when I witness and be more involved in my church. I don’t feel I have been called to preach, but I do feel the Lord has a plan for me and this program at Christian Leaders Institute is a part of that plan for my Christian training journey.

Education Opportunity: God’s Will Be Done

Evangelist Training Opportunity: In Pursuit of Fulfilling My Purpose
Scroll to top