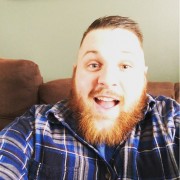 My name is Adam Mack, and I live in Pennsylvania, the USA with a buddy and his family who are all a wonderful, loving Christian family who have helped me with my walk with God.

I grew up living a secular lifestyle because my family were not believers. I have early memories of going to church a few times, but we all stopped going, and I was never brought up on biblical principles. I went to public school and played soccer and basketball and had the typical secular mindset growing up. My parents got divorced when I was in 8th grade, and that took a toll on me even though I didn’t think so for the longest time.

I ended up resorting to partying, and doing /taking drugs, and all the other bad things that come with the territory of a teenager who just wants attention and to be cool. Through the years of partying and bouncing from house to house, I found myself staring down the barrel of a gun due to a drug deal went wrong. Though I survived it, I began drinking to the point where I would throw up in my sleep. My parents were disappointed in me, my friends were disappointed in me, and I was disappointed in me as well as scared that I would never amount to anything.

I had a Christian friend that attended Baptist Bible College in Clarks Summit, PA and I called him up one day and made plans to visit him for five days in which I did a few days later. Through the whole experience of just getting away and meeting new people and experiencing the Christian culture and feeling the Holy Spirit working on me, I declared that Jesus was my Lord and Savior in November 2012. My partying did not stop there, but I did end up attending Baptist Bible College in August of 2013 for one full academic year. Through that experience, I met a lot of great people, played soccer for them which was Division 3 NCAA, and learned a lot about Jesus, and how to study God’s Word.

I could not attend the following year due to how expensive the tuition was at school. Though I’ve had my ups and downs since then, I have always tried and stayed on the path of Lord. I have always felt that God has wanted me to do something with the youth as well as sports, but also to be a church planter and a Christian leader of some sort, but I just could not identify where God is leading me. So my ministry dream I believe is to start a sports ministry, but as well as be a Pastor and or be a Christian Leader/Speaker. Sports was a big part of my life growing up. I can interact with the youth and the constant telling from my peers that I should do something with youth ministry. God has laid youth pastoring on my heart.  The challenges I face here is that I am in the mountains of the Poconos and everything is just too far to walk too, so it makes it hard for people to just show up to an event of any sort, or to do anything.
The church I attend currently, Community Church, I have just started going to, so I don’t know many people yet, but they are encouraging in me becoming very active. The church also does not have any sport ministry or anything to do with sports, which for me is a good thing, because it opens a door for a possibility for someone, meaning me, to try and start something up at this church. The possibilities seem endless here!

This scholarship is so important for me, because I have tried over and over again to try and attend school not only just to get an education, but to learn ministry, and God’s calling for me, but I have not been able to do so, because I just have no financial backing to actually attend school.

Ministries, churches, and organizations want to see that you have some experience and degree to back you before they put any trust and responsibility on you, so that is also another reason why I want the CLI scholarship. Learning more about God’s Word and how to minister to others is something I’ve wanted to harness ever since I became friends with Jesus.

Church Planting Passion – Give me the Hebrides or I die.
Scroll to top