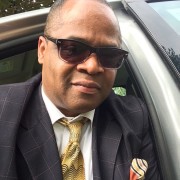 My name is Barry L. Johnson Sr. I live in the United States of America. I have lived a life full of reckless abandon with a sense of disregard for sensibility and safety. I was born in 1958 in Catherine Booth Hospital in Cincinnati, Ohio. Back then that was the only hospital that serviced black families. My life started in a two parent home. Both parents were Episcopalian. I severed as an acolyte for St. Simon’s Episcopalian Church. I attended their private school. We were taught by nuns. They were stodgy old prudish ladies that would not hesitate to whip out a paddle when necessary. That phase of my church life was very strange and at times scary. I did not have much knowledge of My Lord and Savior Jesus Christ.

At the conclusion of the third grade my Mother decided to pack up my sisters and I and left my Father. At first it seemed like a mini adventure. I had no idea what my Mother’s plans were. I got the chance to serve as the protector of the family as we left town in search of a new home.

We arrived in Dayton, Ohio in 1967. At that time most of the major cities were plagued with riots and civil unrest. My Mother secured a three bedroom apartment for us in a Public Housing facility. We were enrolled in a public school called Highview. That was quite a culture shock for me. I went from attending a private school that required uniforms to an inner city public school. The majority of my wardrobe was blue pants, white shirts, blue sweaters and bow ties. My first few days at Highview were very interesting. My fellow classmates laughed at my uniforms and called me Sidney Poitier.

My sisters and I met a man named Timothy Mundy. He was a single man who had never been married. He was an ex-marine who lived in the same complex. We introduced him to our Mother. Shortly thereafter they decided to get married. He was a member of a large church named Mt. Calvary Baptist. He grew up in Mt. Calvary and was very involved. My sisters and I were baptized in the church. We attended on a regular basis. As far as I can remember I did not pay attention to the Pastor’s sermons nor did I read the Bible. From what I can remember my attendance in Church must have had an osmosis affect on me because I had a sense of right from wrong as a young man. I did not smoke or drink and I landed my first job at the age of twelve delivering newspapers. I had an event with the judicial system. I saved enough money from my job and bought a ten speed bicycle. I was so proud of myself. One week after I bought it someone stole it from me. I decided to take the easy route and while listening to a friend of mine I decided to jump on the bus and ride to the rich side of town to steal a replacement bicycle. After I performed the deed I was apprehended and found myself in jail. My Mother came and got me and took me home. I felt that what I did was wrong but I found a way to rationalize the deed. I felt in my mind that sense I had worked so hard to purchase the bicycle I deserved to have another one regardless of how it was selected.

I attended the West Dayton Boy’s Club. It was located in a building that was right in the heart of the most dangerous Housing Developments (The DeSoto Bass) in Dayton, Ohio. One evening as the doors were closing for the day I was attacked by a group of young men my age. I ran and jumped in an automobile. I reached over to lock the passenger door. I neglected to lock the driver’s door. I was dragged out of the vehicle and punched and stomped. I attempted to fight back but the numbers were not in my favor. Suddenly I heard squealing tires. It was my Step-Father to the rescue.

During my high school years I was part of the Dayton Public School’s integration experiment. I was required to attend a school that was predominately white. The years before I attended were filled with violence and neighborhood resistance. The year I started was the beginning of peace and tranquility. From that point on my school was successfully integrated. During those years there was a sniper who patrolled the streets and was randomly shooting people. It was actually safer to walk home in the dark allys than on the sidewalks. He wreaked havoc on the streets of Dayton for four years before he was captured.

While attending high school several of my classmates were having sex and many of them fathered children at the age of 14. Many of them were drinking and smoking marijuana. Some of them were robbing people and breaking into houses. For some reason I never participated in any of the above activities. I was friends with my classmates but when they decided to drink, get high or have sex something inside compelled me to not follow their lead.

I received a football scholarship with Indiana State University. Five years later I was married and had my first child. The marriage lasted 5 years. I received joint custody and raised my daughter on a part-time basis. I lived a life of multiple experiences with several women. I drove fast cars and motorcycles with no respect for safety or speed limits. I remarried and received full custody of my daughter and had two more children.

In summation as I look back at my life I survived many dangerous situations. God paved the way for me all though my life. I was living in Grace and Mercy. I have three healthy children that are productive members of society. I am in decent mental and physical shape. I am an intelligent, assertive and aggressive man that loves Jesus. I have worked in sales and marketing for the past thirty five years. I am convinced that all of my life’s experiences were all part of My God’s plan for my life. All of my experiences left me with indelible impressions of different walks of life. I now have the passion to tell people about Jesus. I am currently involved in my Church’s Prison Ministry and have received security clearance and approval to enter any correctional facility in Ohio. I am an Ordained Minister with credentials to support my title. I have been approached by members of the Deacon Board for consideration as a Deacon. My sales and marketing ability will now be used to save souls.

I want to think, act, walk and live like Christ.