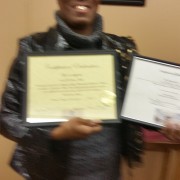 As Christian Leaders Institute launches our Women in Ministry Ordination, I’ve taken some time to reflect on some of the amazing women we’ve seen here at CLI. As I looked through the stories shared by women in ministry I discovered this compelling testimony from a recently ordained woman. I’m excited to share her ordination story with everyone as we launch this next step in CLI ordination.

I would like to begin by introducing myself. My name is Iva L.M. Zeaunc-Paddio. I am from the Deep South, New Iberia Louisiana in the United States of America. I was raised by my great- grandmother in the Methodist Church. I began my walk with Christ at an early age, when I can remember is at age seven walking to church every Sunday with my grandmother. Service began at 7:00 a.m. sharp. My grandmother was never late, so that meant my family was up at 5:00 a.m. every Sunday morning. Sunday school began at 9:00 a.m. and of course we attended every Sunday faithfully.

As I got older – about thirteen – there was the church summer camp every summer and I attended that also one of my camp counselors ask if any of us was predestined. I really didn’t know what the word meant at the time, but I said yes I was.

There was always this aura tugging at me that signaled me that something was different about me, that I really was predestined to witness for Christ, to spread his gospel. I knew what I needed to do, but I didn’t act upon it. I drifted away from God and into the secular life for many years. Finally when my life had reached an all-time low, I met a minister and his wife who befriended me and brought me back to Christ. But still I wasn’t walking the way I needed to.

Several other clergy including my former brother –in-law spoke to me and told me I had a calling that had to be full filled. To stop running. My question was, where do I begin? I don’t have the money or the transportation to go to a traditional seminary. Traditional seminary is very costly. Not very close to where I live. So I searched the internet for help. There it was Christian Leaders Institute. At first I thought, Nah! this can’t be true. A free online College education.

Well after I researched everything I found out that CLI was very transparent. Everything about the school and its founders was in different search engines. It’s not common that you will find any institution that makes all of the information concerning their school available to the public for viewing.

The education that I am being provide is top notch. CLI provides this valuable training through generous donations only. The education I have received is invaluable. Through CLI I was able to accelerate the time it would have taken for me to become an ordained minister in the church I am a member of. CLI ordination class gave me the knowledge needed to become an ordained minister in one half the time it would have normally taken through the ministry in my church. The ordination class has so much quality information to increase one‘s knowledge in ministry.

The Pastor of the Church that I am a member of and attend ordained me as an Evangelist and a teacher. He stated that those were the two areas that I am the strongest in. I have gained those strengths in my studies through CLI. The Subjects that are taught are very informative. I have learned a lot and I am very thankful for being given this opportunity to further my education.

Since becoming a student at CLI, I have been given the position of teaching in the adult bible study class. My taking the step to further my education has shown the elders in the church that I am taking the necessary steps to get the knowledge that is needed to be a church leader.

I have also encouraged another member of the congregation to start taking classes through CLI. After seeing my accomplishments my fellow church member became interested in furthering her education in ministry also.

CLI has opened the doors for the ladies in our ministries, because they are becoming more active in the ministry now that they can see the accomplishments that are being made by myself and our fellow sister in the ministry through our classes with CLI.

We know there are many women out there like Iva who God is preparing for ministry. Many of these women are called later in life, or just don’t have the money to attend a traditional seminary to be ordained. We’re grateful that God is using us to help people like Iva – called female leaders in His kingdom.