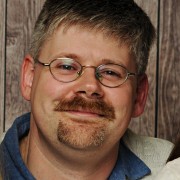 My name is Colin Langille, a 38-year-old (at the time of this writing) living in Halifax, Nova Scotia, Canada. While I have only been a born-again believer for not quite 4 years at this point, I have been heavily involved in “church” since I was 11. Through that time, I have experienced worship from the point of view of almost every major denomination in our area: from United Church of Canada, to Anglican, to high Catholic, to Wesleyan, to Pentecostal, to Southern Baptist. Someday, I even hope to experience worship from the point of view of an ecclesia of Christians.

The biggest challenge to finding a real, authentic experience of God in worship in Halifax, Nova Scotia is being surrounded by so many half-measures, all claiming to be the real thing. When I first began “doing church”, it was as a young church choir member and organ student. I accompanied the choir and played pieces in the name of the “Ministry of Music” (which unfortunately had very little to do with Ministry), and even then, I knew that the applause was wrong. When I left for college, it was to study organ and church music at McGill University in Montreal, and six years of study and two degrees later, I was a better organist, but had still learned nothing positive about worship. Sadly, the organist world in Montreal was a gossip pit of who was sleeping with whom behind which organ after service, and people competed with each other to put on the best show and most impressive music, quickly tacking on a “for the Glory of God” only if they feared a priest might be nearby.

During my time there, I felt that there should be something more. I remember meeting with the priest of the church where I worked about “becoming a minister” after completing my music degree. He was very wise and gracious, and insisted that I examine my motives and attempt to discern if I truly felt a calling from God. Somehow, I had the sense to realize at the time that wasn’t for me.

Returning to Halifax, I found work as an organist in an Anglican church. I remember being asked at the end of my interview if I believed in Christ as my Saviour and wondering to myself what that had to do with being a church organist. My pride and arrogance had been bred into me at school and grown within me like some unholy parasite, and I set out to repeat the same patterns I had learned (fortunately, without the sleeping-with-people-behind-the-organ part).

Then I took a job as a music teacher at a small conservatory, and met a former pastor-turned-school-administrator. Her background was very different from mine (one which we high-and-mighty organ students mocked on a regular basis), and for reasons that can only be God, I kept going back to her office to talk about Jesus. I didn’t believe half the stories she told of the miraculous wonders she had seen during her time in the ministry, but I wanted them to be true.

After a few years, I married her daughter, and we had a daughter of our own. She was patient with my spiritually-dead church and we continued there for a time, until she finally pushed me to move on. I had become a full-time school teacher by then, and the demands of family and two jobs was becoming too much.

We began attending a local Wesleyan church, and there I had my first experience with modern, evangelical worship. In the beginning, I gritted my teeth through the guitars, drums, and pop music while bringing my many years of music analysis and bred-in-the-bone snobbery to a full and unflattering judgment of what I was hearing. But though I could turn my nose up at the uncultured sound, I could not help but see and feel how much more alive the atmosphere was, far more “right” than that created by any great choral anthem sung for the praise of people. Here, people worshipped God, rather than sat and watched as we allegedly did it for them. I experienced my first brush with the anointing of the Holy Spirit.

Here also, I heard sermons to which I actually wanted to listen. I learned about grace, forgiveness, and the personal love that God has for me. I began to actually read Scripture, and with the help of some online resources, succeeding in my first cover-to-cover read. I began to see how everything fit together; I began to have a faith of my own. Finally, in November of 2012, the Lord helped me work through some final exercises in forgiveness of those who had wronged me, and when he led me to ultimately forgive myself, I felt his love pour through me.

Since being born-again, God has given me a voracious appetite for learning about His ways. I have re-read the Bible, finding more and more truths within its pages, and I have devoured other Christian books on a myriad of topics. I know that God has blessed me with the gift of teaching and that he has called me to be a worship leader, using the very styles of music my sinful pride once kept me from appreciating.

Where I live, the Spirit of Religion has a stranglehold on the Christian faith, and churches throughout the region are bound. Revival is so desperately needed, and the only Bible schools in the area have either closed down or embraced Wicca and Eastern philosophies alongside the teachings of Christ. With a full-time job, student debts, family (I now have two children), and a volunteer music ministry at a local church, I don’t have the option of enrolling in a “typical” Bible seminary, either in person or online, and while I can listen to lectures and sermons at my leisure, I know I will never actually accomplish anything unless I am part of a structured degree program. It is my sincere hope that, through the education I can get at CLI, I can learn what I need to help bring real, Holy Spirit-inspired revival to my city. Please pray for Halifax, that eyes will be opened, hearts will be softened, and the Holy Spirit will be allowed to move freely in all churches and congregations.

The goodness of God