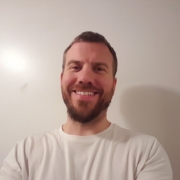 Read here how Mark battled substance abuse for years until he gave his life to Christ and is now committed to Ministry training for work in restorative ministry.

My name is Mark Gee and I’m 38 years old. I live in the United States. I’m a proud dad of 2 daughters ages 16 & 9 and a son who is 3. I work for the United States Government as an Examiner.

A Little About Me and My Life

I am the older of 2 children. My father was from Kentucky where he became a member of the United States Air Force and traveled the world. He eventually settled in Utah and met my mother. They both had been married previously and luckily for me and my younger brother, found each other and were happily married until his passing from cancer when I was just a teenager.

In my grade school-high school years, I was heavily involved in sports such as basketball, baseball and my favorite, football. I played quarterback and really enjoyed competition. But unlike our school’s President Reyenga, in my teenage years, my faith was tested and unfortunately, I was led astray by hanging out with the wrong crowd. I discovered I really liked girls and partying which introduced me to drugs and alcohol.

I had so many “rock bottoms” in my addiction when I was asked to leave my house by my wife. I’ve been to jail but luckily never prison. I’ve caused physical, mental and emotional abuses when I would get into a state of high anxiety and stress, causing me to abuse drugs and alcohol to the point of blacking out and having to be told the next day what damage I had caused. When I was sober, I would never do such things, so I still can’t believe the person I had become. The last time I drank myself into a stupor was the time when I found myself kicked out of my house and in my mom’s basement. I was on my knees begging God to take the taste for these things out of my body. I asked God in the name of His Son Jesus to help me and that I was giving myself 100% over to Him to use as He saw fit. Imagine someone who had been abusing substances for almost 2 decades instantly rid of the urges thanks to God’s grace! There’s simply no other explanation! The anxiety and stress that had plagued me for so long were erased at that moment. I instantly felt a wave of peace come over me. It makes me emotional every time I think about it.

I really don’t have much experience reading the Bible but that’s changing day by day. I also feed my soul by listening to podcasts and going to a local non-denominational church. I felt a calling to search the internet for free Bible training (couldn’t afford to pay tuition at this point in my life). Praise God, I found Christian Leaders Institute and immediately signed up! I can’t explain the excitement I have to get deep into my learning plan! I hope to one day minister to people who were as lost as I was, maybe in restorative ministry. I always believed in God, Jesus and the Holy Spirit but like a lot of people assume, I too assumed they’d forgotten about me. I know now that couldn’t be further from the truth.