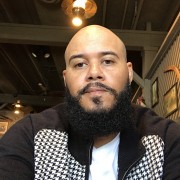 Read his story below:

I was born in the Bronx, New York, and raised in Washington Heights (Manhattan, New York). My parents were raised Roman Catholic but later converted to Mormonism. They divorced when I was 3 and I was raised by my great grandmother.

At the age of 7, I was sent to the Dominican Republic to live with grandparents because my great grandmother had a stroke. I was enrolled in boarding school. For the next 7 years, I was raised following the Roman Catholic religion. At the age of 12, I was baptized in the Catholic Church. At 14, I was sent to live with my mom in Miami, Fl. She remarried a Jewish man and I began to learn and follow the Jewish religion. At 16, I moved again to live with my dad in New York City. He still followed the Mormon religion and upon my arrival insisted I should be baptized and become a Mormon. To please my father, I was baptized and began to attend the Mormon church. At 17, I moved out because I did not get along with my father’s wife. A year later I decided that it was time to find God on my own. I was invited to a Pentecostal church by my girlfriend at the time (she later became my ex-wife), and instead of finding God and the love of Christ, I found criticism and rejection by the church members.

In December of 2001, I moved back to Florida and started to attend a non-denominational church. Still not being able to find and build my relationship with Jesus, I stopped attending church altogether. For the next 13 years, I lived with a woman who became the mother of my two precious children. In 2013, she was diagnosed with cancer. A year later, she found Jesus as her Savior (I wasn’t as convinced), and for the next three years, God would use her to prepare me for what was to come. It wasn’t until her death on July 25, 2016, that I broke and a week later walked into her church (my home church now, New Dawn Ministries) and truly gave my heart to Jesus, allowing God into my life, and a major transformation has been happening in my life ever since.

I finally received Jesus as my Lord and savior. It has only been five months since her passing, but the Lord has given me peace in knowing that she was saved and left me in the path to salvation. I have felt him calling in my heart to become something greater than what I had become, and this is the reason I have decided to attend CLI.

Read other CLI stories on the CLI Facebook page.