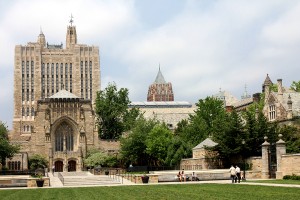 Educators in the state of Iowa recognize the necessity of global education. In her article in the Des Moines register, Madeline Becker talks about the extensive benefits of education, concluding with this statement:

Here in Iowa, we understand the importance of increasing these investments. For us, it is hard to imagine what life would be like without education. It’s time for the United States to make a childhood without education unimaginable everywhere, and it is only fitting that Iowa lead the charge. Iowa’s congressional delegation can lead by co-sponsoring the Education For All Act and supporting a greater investment of our existing global education funding into Global Partnership for Education. This is an investment in our future, and the future of the world.

While Madeline seems to stay focused on the traditional classroom education, a much bigger name gave his endorsement to the online education methods. Richard Levin, president of Yale University for 20 years, has officially been announced as the new CEO of Coursera. Coursera is a higher education institution whose mission is to provide college education to people all over the world through the internet for free. With Richard Levin’s signing as CEO, they add Yale University to the list of schools that their students have access to.

Of course, as one might expect, the courses available through Coursera do not include pastoral education or Christian Ministry training of any kind. Their focus is educating people throughout the world in order to give them a better life, but that better life is defined by human perspective. The end goal of the educators at Coursera – including Richard Levin – is to help people make more money.

This is certainly a noble mission – to reach into the poor places of the world through the ready conduit of the internet and enable people to achieve a better standard of living. Yet, for all this education can accomplish, Coursera ignores the most important problem that exists throughout the world today.

Food and water are important. Without them our bodies cannot live, but there is something even more important. Jesus told His disciples “I am the bread of life…” He told the woman at the well “I am the living water…” He told Martha “whoever believes in me will never die…” and “if anyone believes in me, though he dies, he will live…” Food and water sustain our physical bodies, but only Jesus can sustain our spirits.

How does He sustain our spirits? He sends people into the world. In a discussion with His disciples, Jesus says “pray therefore, that the Lord of the harvest will send workers…” He later specifically sends His disciples, saying “Go into all the world and preach the gospel…” God calls people to shepherd – to provide spiritual nourishment for – His people.

That is why Christian Leaders Institute exists. While Coursera, now headed by the former president of Yale, looks at the physical needs and seeks to provide, our goal is to claim the internet for Christ. We want God’s called leaders worldwide to have the education they need to be the best stewards of His calling that they can.

Coursera has been around for 2 years, and their momentum and support has grown by leaps and bounds. Educators in universities everywhere see the need for free secular education online and pitch in to do their part. They can all unite under the secular vision of saving physical bodies from hunger and sickness.

Christian Leaders Institute has been growing for ten years, with the first online courses being offered eight years ago. We have seen marvelous growth in that time, but imagine how much bigger that growth would be if Christians everywhere could get behind a vision. If Christians everywhere could join in the vision of saving people all over the world from the greatest sickness of all – the only worldwide hereditary disease: sin. As great as the impact of CLI is now, it could be much greater if Christian educators banded together in this effort.

Do you know somebody who’s called to be a leader in God’s church? Do you know somebody that you’ve observed leadership qualities in, and you think they would benefit from ministry training? Tell them about Christian Leaders Institute! Spread the word to everyone. Together we can claim the internet for Christ.

The Power of LOVE