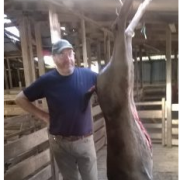 My name is Ian Gould and I feel called to minister as an outdoorsman chaplain. I’m a bit wary and skeptical of things and scams on the internet, especially free offers. When I joined this course at Christian Leaders Institute, I was a bit skeptical. I’m not now. I can see the great benefits CLI provides in helping arm thousands of people from all backgrounds and cultures with the knowledge and confidence to help spread the word of God. I’m in Melbourne, Australia and was born into a Presbyterian family who for a number of reasons stopped going to church in my teens. I’m now in my 50’s and worship at an Anglican church.

My journey started a few years ago with seeing a movie about Martin Luther (“Luther”) which lead to reading some of his sermons (I especially like his sermon on Lent). More recently a book I was reading had a chapter on prayer that quoted from “The Message” Psalm 6 which struck a chord with me. I’d say this was my turning point. Like David, I spoke/prayed alone and out loud to God. Almost immediately things started to change for the better. It wasn’t just my attitude that changed. Good things happened. And then I started going to a local church.

Hunting is a predominantly masculine pursuit and men are under-represented in many churches. My dream is to be an outdoorsman chaplain. My dream is to help bring the word of God to men who hunt. Men who like the outdoors need God too.

I like to hunt and fish. I like to hunt my own food (sustainably and ethically and legally). To me being in the outdoors refreshes and renews my soul. Sleeping out in the bush and under the stars helps me appreciate the wonder and beauty of God’s works and to keep eternity in mind (in the city of Melbourne you can rarely ever see any stars). Hunting often requires many solitary hours, allowing for quiet reflection. Taking an animal’s life to eat, and respecting that life, reminds me of my own mortality. Saying grace over meat or fish I have killed has a deeper meaning for me than store-bought meat as I have seen the animal or fish it came from. I killed it. It died so I could eat.

I’ve contacted a number of denominations about reaching out to hunters and fishermen. In spite of shrinking congregations and fewer and fewer men, it’s clear to me they are not interested in reaching out to men (especially if they hunt). I have proposed that a part-time outdoorsman chaplain to hunting and shooting clubs and organizations would be a good way to begin to connect with these men. I’ve had rude responses. Hunting and shooting are not politically correct, and it seems to me the church leaders here are just not interested in anything not politically correct.

I think ordinary men are neglected by the church. Outreach programs to the poor and homeless are good, but in a welfare State like Australia, where single mothers on government benefits can afford to go to Thailand for a holiday (fact), how much extra material help is really needed?  Where is the spiritual help? Where is there any attempt to reach ordinary men? Aren’t they in equally great need of knowing Jesus? Can’t the church do both, i.e. walk and chew gum, at the same time?

In my view, the church needs all types of leaders from all backgrounds. There are pastors from all backgrounds and cultures it seems, EXCEPT outdoor-type men. Men like me need God too. In the early 19th Century, the Rev Dr. John Flynn (Flynn of the Outback) was widely admired and respected for his work in the Bush, his portrait is on our $20 banknote. As a kid, one of my pastors played VFL (professional) football. Others were veterans. I could relate to them. But now I see very few church leaders that I can relate too and even fewer leaders who even want to know ordinary men like me.

I’d like to show by example to other Australian men that it’s okay to hunt and fish and to be a Christian. Where are the “fishers of men”? (Matt 4:19).