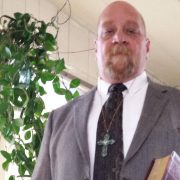 I am Ron Fisher from Bowling Green, OH and I have a dream to be an ordained redeemed minister. I was born in Toledo in 1963. My childhood was troubled, and I began drinking at the age of 8 and drugs followed at age 11. As a teenager, I was completely engulfed by the world and all it had to offer: crime, drugs, alcohol. I was not a poster child for the Christian life. I was a poor student in high school, and disrespectful to my parents and authority figures.

During my sophomore year in high school, I reconnected with a young lady I knew from grade school. We married right out of high school at the age of 19 and had four beautiful daughters. By age 20, I was a full-blown alcoholic, drug addict, abuser and all around nasty person. Understandably, after fifteen years of marriage, we decided to go our separate ways in 1995.

During these tumultuous years, I was introduced to Christ. I would commit to Him for short periods, then go back to the wide path of destruction. Early in 1996, I met a woman and we married a year later. As a truck driver, I was not home very often, but my wife did not complain, nor did she know of my addictions. Maria learned of these addictions after my first heart attack at the age of 37. I desperately tried to stop and failed for years. Finally, on 12/22/2013 with two heart attacks under my belt, I fully accepted Christ into my heart and was delivered from my addictions.

Once saved, I knew I was called but did not know where or what my ministry was. My daughter Anna kept on insisting I check out a local ministry in downtown Toledo called The Saturday Morning Community Picnic (find us on FB). I resisted Anna’s suggestion for months until finally, I accepted the invitation. That first Saturday at the picnic changed my life; I knew what I was supposed to do, and who I was supposed to do it with.

Moreover, through the picnic, I met a man who introduced me to my pastor. Six months later, I became the assistant pastor of a little inner-city church in Toledo, OH. Today, I minister to the homeless and those with addiction issues. In addition, we’ve also started a men’s recovery house, a food pantry twice a month, and much more. My faith in Christ has delivered me in so many ways there is not enough room to write it all. God has blessed me beyond anything I could ever expect.

My Christian Leaders Institute scholarship allows me to dig deeper into God’s Word. My awards will be accreditation to my ultimate goal of becoming an ordained redeemed minister. If I had to pay for these courses I would not be able to afford them. I am now working full-time in ministry without any pay. I left my former job and am now following the call on my life, and truthfully, I wish I would have done it sooner. I am glad to have run across this ministry. Thank you for what you are doing to help folks like me. Moreover, thanks to the DeVos family for supporting this school. Peace be with you and God bless.