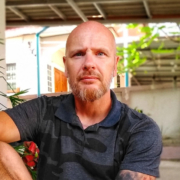 I have a mission ministry calling and am excited to receive mission ministry calling education at Christian Leaders Institute. I grew up in the church, but my belief had very little depth and not much fruit. In our mid-twenties, my wife and I decided that we should bring our young daughter to church. We wanted her to learn the basics of Christianity. The church we went to was mission focused and talked about Christian growth. Since I was serving in the military, this caught my attention. What was the point in filling my head with knowledge if I wasn’t going to put that into play?

One Sunday morning, our pastor was preaching about salvation. He talked about how many claim to know Jesus but that few follow him and his teachings. It struck a cord, something about his words convicted me. I was a fraud. I said I believed, claimed I was a Christian but did I follow His teaching and commandments? Did I only do them for credit, to show an example to others or to feel good about myself? Did I love him or not?

I gave myself to Jesus completely that day, but God had more for me. He had plans that would rock my world.

Our family began to seek more and more ways to understand God’s will for our lives. We actively pursued ways we could make a difference within our community. It was while volunteering at a Christian Concert that I met Aaron Boyd, the founder of Bluetree. He sat with me and talked with me about a recent mission he had done on the border of Myanmar.

There was something about his words that spoke right to the core of me. I received my mission ministry calling, and I wanted to be part of what is happening in South East Asia. Aaron helped make it happen. He introduced us to Christian Freedom International. He set the wheels in motion for what would be a complete shift in all of our lives.

After a couple of short term missions here with the family, we decided to jump in with both feet and eyes wide open and serve God. I quit my army job of 16 years and threw myself into the role of Director and Pastor alongside my wife who focuses on teaching English and Stewardship.

We’ve been at this Bible school now going on four years. Our mission has continued to be focused on serving the poor and persecuted of the area. That includes teaching leadership focused Bible lessons to a significant number of ethnic minorities that have run from the fighting and persecution happening in Myanmar (Burma). We deal mostly with refugees that are trying to establish a new life in a new location or want to return home and serve God by helping their people.

Working in the jungle has been a considerable change from the cold and sometimes snowy weather of Canada. Not only is the weather completely different, but we’ve had the opportunity to grow and learn more about the people groups here and how God has influenced their lives. Unfortunately, we aren’t entirely free to travel into the refugee camps or cross the border into the conflict areas. However, we have been able to do so thanks to the connections we have established with the local churches, community leaders and military commanders.

One of the key things I discovered is that titles are important. My position as Director of a Bible school and retired Army Captain has given me some respect. But, ordination would open more doors. Besides, I can’t expect my students to be pushed towards personal growth and betterment if I am unwilling to do the same myself. I found that many groups online would ordain me. But this specific ordination course at Christian Leaders Institute has asked more of me. CLI wants to train me. A curriculum focused on the foundations of Christian leadership, which is what I am also teaching here, would inspire me and add to the school’s mission statement and direction.

Our school serves as leaders at a couple of local churches. Our teachers and former students are helping as elders, deacons, youth pastors, and worship leaders. I also partner with those churches for many events and outreach. I attend and serve as one of the pastors of a church that is mostly foreigners that are working with the poor and persecuted of the area in a variety of different ways.

Bible Training Education: From Darkness to Light
Scroll to top