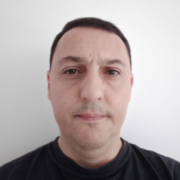 Hello, my name is Peter Deneke, and here is my ministry training education journey to CLI. And I am from Johannesburg, South Africa. I am single at the moment, but I would like to meet a godly woman. I came from an alcoholic family background, which led to lots of rejection and abuse. As a result, I became timid and fearful. I had some Sunday school influence and Catholic influence from my mom. I did get saved as a teenager but still had a struggle with sin.

My Journey in Ministry Education

In 1993, I got called up to the army. I was terrified to go and landed up for one week in the psych ward with anxiety and depression. I later met a Christian who invited me to his church in Pretoria called Hatfield Christian Church. The Holy Spirit powerfully touched me there. I also received baptism there.

The next year, I returned home and went to a Pentecostal Church related to the Hatfield Church. From 1997-1998, we had revival, and I was powerfully touched. I wanted God to burn out the rubbish and empower me. I joined a cell group and feeding the homeless ministry. There on the street, I heard God’s voice and felt his anointing. I felt a pull to do Bible studies with Rhema Bible School. That’s where I learned the purpose of renewing the mind. I had some ups and downs in my Christian walk. God allowed disappointment and setbacks to teach me things and uproot some wrong teaching.

Schooling in the USA

In 2008, I had a desire for some prophetic training, and God opened the doors for me to go to Christian International in Florida. This school is where God started to deal with the wounded parts of me. I went for six months of counseling with the restoring the foundation’s ministers. It was truly life-changing. I realized I had a call to counseling, inner healing, and deliverance ministry. After I gained a master’s in ministry degree, I also did some prison ministry and gained confidence in teaching in front of men.

I returned to South Africa in 2012 and did some teaching at a Christian School. In the next phase of my training, I enrolled in psychological counseling at UNISA. It took me six years to finish my honors degree. I also spent a year teaching in China.

Recently, a friend told me about the Christian Leaders Institute. So, I enrolled since I want an accredited degree. This ministry training education journey to CLI has been eventful. I am excited to see what God has in store with CLI.