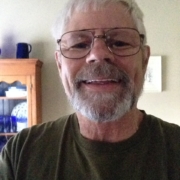 My name is Jon Christian Porter, and I am from the U.S.A. I am blessed to receive free ministry education online at CLI. “I will arise and go to my father and will say to him, ‘Father, I have sinned against heaven and before you.'” Luke 15:18 (NKJV).

Childhood was not easy for me. Breathing was often difficult due to severe asthma bouts. I am thankful for my mother’s care for me. When we moved from Maryland to Northern California, I began to heal. I grew up in the beautiful Napa Valley and attended the Napa Presbyterian Church.
As I recall, no one ever asked me if I had a relationship with the Lord. My dad was an Elder in the church. He was a fine man, but somehow, I didn’t seriously learn about the Lord until my college days.

I did not know the Lord, but He knew me! I know that now. God protected me from death several times as a child and as a young adult. Jesus had and continues to have a plan for my life. It was a destiny that I could not escape – like Jonah. A stubborn, defiant, capable young man, I could order my own life, follow my plans, create my destiny.

I was far more interested in playing sports than listening to my professors in college until I was knocked unconscious during an intramural sports event that ended my sports career from athlete to an uncoordinated bystander in a moment. After three days unconscious, I began to awaken, but to a new reality — no more sports. I did not know it then, but I certainly know it now – the Lord had other plans for me. The concussion was a blessing that forced me to reconsider the purposes of my life.

DISCOVERING THE LORD IN HIS CREATION

From that point on, which was during the second year of college, I began to take my studies seriously. Surprisingly, and an unintended (by the professors) consequence of my studies in chemistry, cellular biology, and related topics, I became aware of the excellent miraculous organization of life! The curriculum focused on evolutionary theory, which was ridiculous.

I began to search for answers, and slowly ploddingly found the Lord. “For since the creation of the world His invisible attributes are seen, being understood by the things that are made, even His eternal power and Godhead, so that they are without excuse,” Romans 1:20 (NKJV).

My passage from nonbeliever to believer was slow. It was not until I was in my 40s that I started to study His Word seriously. I have asked this question that I now ask you, “What if the Bible is true? What would that look like?” And so, my quest has been to clarify the walk that a believer must take.

Even today, at 72 years of age, my walk with Him is just beginning. Thankfully, God led me to Christian Leaders Institute for free ministry education online. Which works well since the Lord has also graciously placed me on a remote island in the Philippines. I teach ukulele with Christian music, prayer, and testimony through churches of various denominations. My dear wife Janice is in the USA, having recovered miraculously from very advanced stage 4 lymphoma. That fantastic story I leave for her to tell.

If I could give but one thought of advice to Christians, it would be, “It’s not over till it’s over!” As Paul said, “I have fought the good fight, I have finished the race, I have kept the faith.” 2 Timothy 4:7 (NKJV). May we do everything we can to run the race to the end of our mortal lives – until the moment He calls us home. God bless you all!