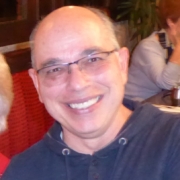 I was born in the United States of America, in Jonesboro, Arkansas. My mother was a nominal Catholic and separated from my birth father shortly after my birth. So, I had a little exposure to Catholicism from my mom. However, she was never serious about her religion, so neither was I. So, essentially, I grew up with no actual Christian teaching.

My mom remarried when I was about five years old. After that marriage, I gained a stepfather, three brothers, and a sister. My stepfather was a mechanic and always thought our place was not as good as elsewhere. So, as I grew up, we moved many times and lived in 13 different states. Somehow, I graduated from high school despite all the moves.

At 18 years old, after graduation, I joined the Air Force. It’s funny how God orchestrates life events. After entering the Air Force, I went home on leave before being sent overseas. While home, I decided to go roller skating with friends. The guy who owned the skating rink offered free popcorn and a movie for those willing to hang out. We decided to stay. Though I remember little about the film, I did note that it was a Christian movie where the gospel was presented at the end. At the time, it seemed to have little impact on me. So, I ignored the gospel invitation. However, a tiny spiritual seed was planted.

My first duty station in the Air Force was overseas in England, working in the intelligence area. Outside of work, I was like most of the guys away from home for the first time. We all went to the base club/bar to pick up the girls during our time off. During one of those bar visits, I looked at the party around me and became dissatisfied with my life. I felt sorry for many of the people. During that moment of self-reflection, I realized I was one of those I felt sorry for. So, I decided I wanted something more to life, but the question was how to make that happen.

My initial thought was that perhaps religion held some answers for me. So, I decided to start investigating religion. I developed a plan. I planned to give each religion one month of serious examination. Then move on to the next one until I found the answers I sought about life. The first question was, which religion to start with? That’s when that tiny seed planted in a Michigan roller skating rink bore fruit. I remembered the movie about Christians, so I decided to begin there.

I asked around if anyone knew some Christians. A couple of guys told me about a Bible study that met on the base once a week. So, I showed up uninvited to the Bible study. When asked why I came, I told them I was investigating religion, and Christianity was first on my list. I told them I planned to give one month to Christianity before I moved on to the next belief. Then, I said, for that month, I would do anything they did to gain a complete understanding of what Christians were all about.

The month went by quickly. The fellowship was fun, the church was exciting, and it became apparent that they had something I did not. But, despite them explaining the gospel to me several times and hearing it in church, I could not take the final step of relinquishing my life to God.

On the last day, I went to my final singles fellowship meeting. I left the group meeting and sat by myself in the dining room. The host family had a little girl about 12 years old. She came into the room and looked at me. Finally, she spoke, “So, have you accepted Jesus yet?” I said, “No.” She looked at me again, thought a minute, then said, “Why not? It’s so easy!” Then she left the room. I sat there in frustration, thinking, “How could it be “easy” but so hard for me?”

The next day was Saturday, and that night I went to a bar to consider what my “religion” would be. As I sat there, I became increasingly frustrated by my lack of progress. Finally, I couldn’t stay there any longer, so I went for a walk. It was a dark evening, but clear with no rain in “rainy” England. So, I walked. I thought more and more about why I could accept what the little girl had said was so easy.

I realized I wanted to completely understand God before accepting what He said. It was giving up control without knowing to whom I was giving it. Then, I thought a little more and realized that if God was the God of the universe, He knew everything. I pondered the fact that I was a finite human being. So, I could never fully understand a being with infinite knowledge. I then realized I would have to accept what he had done and trust Him to care for the rest. So, all by my lonesome on a base in England, I acknowledged my sin, asked His forgiveness for my sin and pride, and accepted the work that Jesus had done on the cross.

Back in my dorm room, I talked with my roommate, who was not a Christian. I told him what I had done; my roommate decided he also wanted to accept Christ. So, he prayed, and after that, everything changed. We shared with others and attended Bible study and church. Our little group multiplied. We started a children’s Bible club downtown, went to London to run services for the mission, and gave out tracts on the streets of London. I even preached a sermon at the little church we attended. We also were pulled into a Navigators organization Bible study. There, we received solid teaching on the Bible. Between the discipleship training of the Navigators and our very active Christian service, we gained a firm foundation of faith for the future.

After returning to the states, I joined a local church. There, I met and married my wife. God immediately gave us an assignment overseas. There, we grew and served in a small mission church for the Japanese. From there, we had several other missions. God also made clear to me that my spiritual gift was teaching.

I have had the opportunity to continue serving by teaching in multiple churches. As a teacher, I’ve written and conducted various Bible studies, led several Sunday School classes, and served as a Camp Director for a family camp. I also gained a local license to preach, allowing me to preach numerous times. God has been gracious in granting me these many opportunities to serve.

Still, serving in many different ministries along life’s path, I realized that there is still so much to learn about God’s Word, the Bible. While I have a Bachelor’s degree in Mathematics and a Master’s degree in business, that education never filled in the gaps I have in ministry training. God impressed me with the need to be a life-long learner by seeking more knowledge and skills in ministry.

My learning journey with the Christian Leaders Institute began when I needed the training to perform a wedding for a lifelong friend’s family. As I looked online for options to get certified to perform a wedding, I found CLI. I enjoyed the ministry classes online. I also found that CLI offered many other ministry options to help me grow as a minister. So, I’m taking ministry classes online with CLI to get the licensed minister certificate.

Interesting how God works! He started with a guy who knew nothing about God or Christ and took him to a roller-skating rink to expose him to the gospel. Then, God used a little girl to let a young Air Force man know that accepting Christ is easy if you can get that God can never be fully understood and can be trusted for salvation through His Son. He then blesses me with a wonderful Christian wife and many opportunities to serve Him.

I’m unsure what to do once I complete the licensed minister certification. However, I know that the same God I trusted many years ago does know what He wants of me in the future. So my job is to prepare and be content in knowing that whatever happens in the future is in His trustworthy hands.

When you log in to the Learning Platform, you will notice that the Getting Started Class automatically appears on your dashboard.

The Getting Started Class will orientate you to the Christian Leaders Learning Platform and the Programs offered, including:

Note: You can enroll in tuition-free courses or mini-courses immediately without finishing the getting started class.

Women in Ministry
Scroll to top