Ministering – There are places in the world that most churches have abandoned. These places are stronghold’s to the Devils work. In these places prostitution, drugs, mental illness, alcoholism and crime are the pervasive culture. It is here that student Lisa Popejoy is ministering. Her church is This Ain’t Your Mama’s Church Community Biker Church. This church is headed up by her mentors, Pastors Eug & Gwen. This church has recently moved to an even more depressed area of 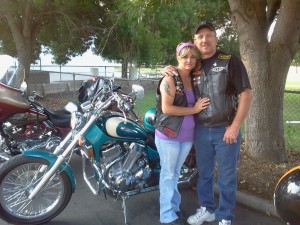 Meet Lisa Popejoy, I am a married mother of 4 children and two grandchildren. My husband and I are servant leaders, ministering in our church. I came to this church only because I wanted to be married in a church as it is my 4th marriage. I never intended on having a personal relationship with God, and He changed my heart and that of my husband and family. I feel God has been calling me to preach to women. So my goal is ministering to other women in the biker community.”

Ministering To A Rough Crowd

Lisa writes, “My ministry dream is to touch the hearts of women who have been beaten down and are hurting, they are of a rougher crowd and have high walls to knock down to reach them. They are women who think God has no purpose for them and that’s just not true, I am a living example of what God’s love can do! I want to be able to go into the prisons and to other places that people are afraid to go and talk to these women.”

Lisa is taking the Online Preaching Class, called “Sermon Construction and Presentation” at CLI. Her first assignment was to write a short sermon that she would give to the group she is ministering to. I am going to share her sermon with you. She writes about her sermon assignment, “This message would be for the audience of bikers, ex drug addicts and felons.”

The term Stronghold means an area where a power exerts control over an individual, group or territory, and, in reference to an evil spiritual stronghold, it is in direct opposition to the will of God.

Satan goes beyond just routine harassment and temptations; his forces seek territory to establish long term strongholds in which they may dominate and hold captive. The evil forces of Satan search for people, cities and areas in which they are not resisted and where they can flourish.

Our new church home is smack dab in the middle of enemy territory.  Prostitution, drugs, bars, drunkards, mentally ill, and the homeless have taken over that side of town, and with all the crime that comes with that way of living, the influence of darkness has flourished. You can see and feel it in the air.

The apostle Paul talks about what we are dealing with in Ephesians 6:12,

For we do not wrestle against flesh & blood, but against principalities, against powers, against the rulers of the darkness of this age, against spiritual hosts of wickedness in the heavenly places.

We all know the saying “You don’t come preaching in my bar and I won’t go drinking in your church.”

Many of us lived that concept when we were out and about in the world and that approach has worked well here at the CLC building on the nice side of town, until now, because This Ain’t Your Mama’s Church just changed the playing field.

We are moving in on enemy territory and we are establishing the presence of the Lord.

We are the army of the Lord on earth; you can’t go into Satan’s domain and cover up the problem. Soldiers do not go into a war and make everything nice; they don’t cover the battlefield with pretty stuff without the expectation of being shot down. You can’t cover up and mask the influence of evil by planting flowers and covering up the graffiti and removing the shopping carts and making it look nice and think Satan’s presence is gone. You have to get to the root of the problem and it’s a spiritual problem.

The enemy is not prostitution, drugs, mental illness, alcoholism or crime, the real enemy is Satan’s presence and his stronghold on that area. If you think you can wage a war against Satan and his army by making stuff pretty to the eyes, then you are welcome to plant a few tulips and see where it gets you. Just remember, when you come back beaten up and defeated, we tried to warn you that it’s not about flowers and fluff but about “spiritual darkness in high places “and all your efforts will have been for nothing.

We are going into battle, to conduct Spiritual Warfare on Satan’s domain. Our goal is to advance the Gospel, pull down the stronghold and bring people into the Kingdom of God. Matthew 5:14-16 we are to bring the light into the darkness.

We are not riding in with guns attached to our motorcycles and cars, helping the police to wipe out the bad and make it a pretty side of town, planting flowers, No, we are going into the midst of the battlefield with Power and Authority in Christ Jesus’ name to overcome the stronghold with SCRIPTURE & PRAYER.

It is not a mistake that our church is moving to that side of town, isn’t it fitting that God chose us to represent Him in that area? We are a peculiar people, we who were the drunkards and addicts, and prostitutes and homeless, all of us convicts and felons, we who have by the Grace of God been saved from exactly what we are waging war against. We are on a mission for God. It’s time to suit up and let’s go do some Kingdom business. Jesus gave us His marching orders. Are you ready to move April 13th?

Lisa is thankful for the opportunity to study at Christian Leaders Institute, “You can pray that I will fulfill the direction that God is leading me. I prayed to God that I would find a school that would take me without money, and he directed me to your web page. So please pray that I will finish what God is preparing me to do.”

I am impressed with the calling of God on Lisa’s life. Ministering in the name of Christ is never easy, and when you are ministering in a blighted area, it can even be more challenging. At Christian Leaders Institute, we train operatives for Christ whose goal is spreading the gospel. These bi-vocational leaders are ministering taking on personal risk.They are fierce followers of Jesus who need our prayers.