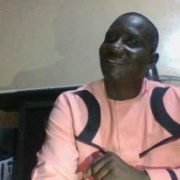 Read here the testimony of David Ted Williams, a Liberian pastor whose faith came alive in the midst of his nation’s civil war:

Before the Liberian civil war, I had just graduated and worked for a rubber company as an electrician. Even though I was born in a Christian home, I only played at Christianity and never dreamed I’d one day be a Pastor. But during the Civil crisis, I never had the opportunity to escape the country like others did. We lived between various warring factions, and they decided who lived to see the next day. One day three of my friends and my older brother were slaughtered before my eyes. I heard them say, “Let’s keep this one for tomorrow.” When the day came they still did not kill me, but I did not know why they spared my life.

The night of that day was the beginning of my prayer time. I would remember how my late mom prayed and I tried following the pattern. The next day, four people joined me to pray. On and on the number increased to thirty-two persons. Then everyone, including the rebels, began to call me “Pastor.” My passion to pray, teach and win souls began to grow more and more. Here I am today, no more an electrician, but the pastor of a church of three hundred members with two branch churches in Liberia.

Liberian Churches don’t have money, so the majority of the pastors cannot afford to pay for seminary courses. Christian Leaders Institute is an opportunity that I can share, especially with its latest program. CLI will be a tremendous help to this nation.

I want to learn in order to support what I believe CLI will do to raise up revival leaders in this nation. God be your helper, as you are our helper. The Lord bless you.