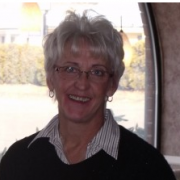 Blessings and Shalom – My name is Corinne Benefield currently living in America, in the state of Tennessee; which isn’t my birth place of Massachusetts. The two states are so different in many ways and quite different when it comes to the things of God. I am a young 56 year old, retired from the Air Line industry of 27 years. Married to my soul mate and a mother of two grown sons. Corinne and her husband have ministered in many capacities over the years. They even helped start a House Church in Tennessee.

My story – I did not grow up in a Christian home, but started to attend church at a young age through a bus ministry and vacation bible school. I’m thankful for those dear saints that reached out to my family and their dedication to serve our Lord Jesus.

One of the many blessings I received was to attend our church summer camp when I was a teen. My dear second grade Sunday school teacher sent me anonymously; which I learned of in my twenties. It was there that I accepted Jesus as my savior.

Not long after this time my parents would divorce, my dad would disappear off into the sunset. I would not see, hear from or speak to him for seven years. This would have a major impact in my life, my image of a father would be one of abandonment.

When I turned sixteen I walked away from the Lord and became very involved in the things of the world. Drinking and drugs would become away of life. Around the age of twenty one there was an emptiness and a longing to be loved. Jesus was the farthest thing from my mind. I would come to meet a man, who was much like my dad and married him. We then moved to Florida.

When we were expecting our first son, I started my walk back to God. This would be just the beginning as I began to build a new relationship with the Lord. During a time of prayer the Lord said to me, …”there is more to me than what you have been taught.” More Lord? What does that mean? So my quest strengthened to search out for more of Him.

Growing up I was told that the things of the Spirit were no longer in operation. Those things which were spoken of in the book of Acts were no more. Within me I needed to know the truth. Were these things dead? Was the Holy Spirit alive and helping people today? If this was to be true I wanted it! Life continued on and there would be many storms and it wasn’t all ‘pie in the sky’. My husband and I would move back to New England. It was spiritually very dry for me there and I began to drift again back to old friends and their influence. At one point I’d had enough and wanted to take my life but I knew it was wrong and couldn’t. I got angry, really angry, at God. I yelled and screamed out to God, “If you really love me then why am I going through what I’m going through? Why Lord?”

One day, not long after that, I saw a guest speaker, a messianic Jew. He began the service with the ‘blowing of the shofar.’ I would not be the same from that day on!

As I sat there the Fire of God consumed me! It started in my feet and like a thermometer’s red fluid going up. As the temperature rose up; up the fire went. From the soles of my feet to the top of my head. I sat there and I prayed… I was being consumed by a Holy God; everything else had to leave. So on July 23, 1995 a line was drawn for me. A line of demarcation. Jesus was no longer just my savior but now he was my Lord.

Over the next ten years I would encounter many major storms. Two failed marriages, hostile work environment and a son that was in trouble with the law. I have good news though! God can use anyone and He is the God of restoration! God has blessed me with a man of God. Together in unity we seek to minister, and love the one in front of us, bringing Christ’s love to the world.

One of my dreams was to be able to do mission work. With my retirement from the Air Lines that door has opened. Using my benefits to minister in other countries and being Christ hands extended.

Both my husband and myself were ordained in July 2013. At that time we were being sent by my home church in Connecticut to start a House Church in Tennessee. There are many churches here in the south, with many forms of religion. Everyone you meet says they are a Christian because they attend a church, but there is rarely relationship with God. My husband and I want to reach those that the local church wouldn’t even consider talking to, for it will be the love of Christ that will draw them in.

This past October the Lord directed us to a body of believers that are like minded. Sunday we were asked to be youth pastors with them. We both love the youth and desire to disciple them to be used by God for His Glory.

I can not express my gratitude to the Lord for the journey which I have taken. Though there have been many storms I have faced and God has never left me. (Thanks to Christian Leaders Institute), I am now able to better understand and capable to minister to those that are suffering and walking down roads which I have already gone. The lessons I learned are very valuable and more precious than gold to me.

I am thankful for Christian Leaders Institute and the opportunity to learn. My husband attended formal seminary training but I have not. A school of this kind was but a dream. To learn in a way which I have always desired but never had the opportunity nor time to do so.

My prayer is for God’s wisdom and revelation. That He will equip us as we prepare and walk out to the destiny which the Lord has called us. Gods love is so amazing, I pray that our lives will touch others so they will come to know Jesus personally and then will touch others for His Glory. Amen.