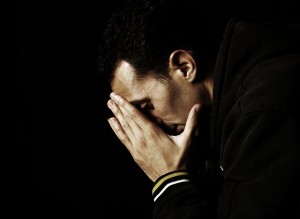 Do you know what it is to be rejected? Have you ever had that feeling that you just are not good enough for your family, for your friends, especially for God? I have known many people like that over the years I have spent in ministry.

One young woman had dropped out of school and her single Mom had gotten very angry with her. She felt that she had so disappointed her mother that all she could do was run away from home. I met her a few years later. She had been living on the streets of New York City with no hope and without God in her life. God gave me the opportunity to help her get her life back on track. While she did not reconcile with her mother at the time that I knew her, she had that as a goal to be achieved in a year or two. First she had to get herself out of the gutter of her mistakes, she told herself, or her mother would still not accept her. She wasn’t good enough even for her mother.

A man who had a bad temper had, some 20 years before I met him, gotten into a fight and his opponent had ended up mortally wounded. He then spent his next 20 years in a prison to pay his debt to society because he had lost his temper one night. When he was due for release from his prison, he was afraid that his family and friends would not take him back after all he had done. His friends had “learned” from his mistake and had straightened out their lives. Now they were husbands and fathers with kids of their own. He doubted that any of them would want to introduce him to the kids for fear his might “infect” them with his temper. He wasn’t good enough for those with whom he had gone to school and with whom he had enjoyed friendship. He was sure he would be rejected as soon as they saw his face.

A group of friends gathered regularly in a little coffee shop to talk about faith and their own personal approaches to faith. They were what one might call the underclass of the city in which I lived at the time. They had found each other somewhat by accident. It was the love of a great cup of low priced coffee that brought them together. They would intentionally get together with each other at least weekly to discuss Wiccan, Native American Spirituality, Buddhism, and agnosticism (each one’s faith perspective). It was somewhat by accident that I came to know one of them and was invited to join the group as the one who would take the Christian perspective with them. So each Wednesday afternoon, I made my way over to the little café to share a cup of coffee and my perspective on faith. What I discovered as I talked with them was that each had decided to pursue the faith they were because they were convinced that they did not fit into the Christian faith. They knew they were not good enough for God. They told themselves that they, if they showed up in a congregation of Christians, would not be happily received. Quite the contrary, they were sure they would be ushered out if only because of their poor dress. They were not worthy of being in the company of Christians as they knew them and they knew they were not worthy of Jesus as they had heard of him. They were not even good enough for the people who looked at our motley little group with a look of scorn each Wednesday.

Good Enough for God – Because of Christ

My heart breaks for people like this. They all have a very special characteristic that they find it very difficult to accept: each one is made in the image of God and God calls each one to come home from the far country to which they have gone. In the Bible we find a story which is called the Parable of the Prodigal Son. It tells us about a young man who takes his inheritance while his father is still alive, goes off to a ”far country” and loses everything in wild living. After a while he “comes to himself” and decides to go back to his father with this thought, “I will say that I am not worthy to be called your son. Make me as one of your servants.” He discovers that his father will have none of that idea. He is welcomed as the long lost son that he is.

One of our students at Christian Leaders Institute, as she reflects on growing up in the church in her homeland of South Africa writes the following,

“I didn’t really understand what I was being told. I was just going through the motions. Then I fell pregnant before I was married. Even though I was engaged to the father of my baby and had never been promiscuous, the church turned its back on me and I was ‘condemned to burn in hell’. I left the church and for many years just drifted in and out of faith. In 2009, God answered a very big prayer!! Since then I have grown and grown.”

She goes on to tell us about a talk she had with God.

“The talk-with-God wasn’t the proverbial whisper, it was more like a hit to the solar plexus. I now know that the Almighty Father wants me to use the talents He has given me, to spread the word, to show others the way to reaching Heaven. There are many people who think they are rejected by God, all because someone else told them so, and all because they fail to reach what they think is the “mark to reach” before God will accept them as they are. Mostly, I wish to help the youth of my country who are so lost.”

Our own perceptions are often so wrong. We need to come to our right mind and discover the awesome truth that God will welcome us when we humbly come in the name of Jesus. That is the message we are training people all over the earth to carry to others on behalf of God, the Great King of Heaven. It’s a message for you too!

What is the Evidence? Why Analyzing God is Foolish
Scroll to top