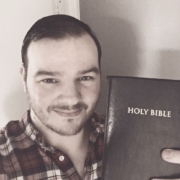 My name is David MacNeill. Receiving this free online biblical education at CLI is a blessing. I am 34 years old. I was born in Scotland where I spent most of my childhood until moving to England in 2003. My home was not a Christian home, and my parents divorced when I was a baby. However, I did go to a state school where we celebrated Christian holidays and sang hymns at the school assembly. In one class, thanks to Mrs. Simpson, we said the Lord’s Prayer every day before lunch. I fondly remember singing hymns on dreary days. We sang loud, and the sun broke through the clouds and shone in the hall. It sounds cheesy, but it’s true! It’s one of my favorite memories of primary school!

I lacked any proper Christian guidance or education. On Sundays, before my grandparents picked me up for the day, I snuck to the local Presbyterian Church to listen to the hymns and sermon. I never told anyone at the time because it almost felt shameful. You see, my birth mother’s side were church-going Christians, and me saying or associating anything positive with them seemed to anger my stepmother.

Anyway, I didn’t have a Bible and going to the church became more difficult since I was supposed to be getting ready to go out with my grandparents. I grew bored and spiritually starved. With the problems at home, I felt weak and powerless. I prayed for things privately such as being allowed permission to play a game or go out, and it seemed to work. But my limited theological understanding ended up with me joining the occult: Spiritualism and Wicca. This, in turn, led me to abuse alcohol and drugs by the time I was eleven.

Between the ages of eleven and 28, life was hell – total separation from God. In 2012, at the age of 28, I was in Amsterdam. We had missed the last ferry to the other side of the city after a day of drinking, taking drugs, and visiting sex clubs. I didn’t take much notice but vaguely remember in the distance someone walking up the port heading toward us. He came straight up to me, ignored everyone else, and he said, “Never forget about Jesus because He hasn’t forgotten about you!” From that time, my life changed for the better. There was a spark inside me.

I wanted to catch up on the lifetime of spiritual knowledge I had missed. I studied Judaism intensively and immersively for a year. Islam for six months. I did a diploma in Christian theology and started a charity helping homeless people in the city. Just as I thought I was ready to begin my ministry, I came in contact with an Orthodox priest.

One thing led to another, and before I knew it, I was in the Orthodox Church. I was a server and had a tutelage under the guidance of a monk. So much happened in such a short time! Things grew a little stale. I was part of the monastery in a satellite cell for two or three years and felt like a rat in a cage. The rigid rules and hierarchy made things difficult for me to go out and spread the word of God – well, that and social anxiety. But God has a plan for me.

The beginning of 2019 brought a new passion for my faith and new friends. Thanks to a friend, I discovered the Independent Fundamentalist and Conservative Baptists. The Holy Spirit brings everything together and renews my faith in God. I’m back on track again. I’ve learned so much here with the free online biblical education at Christian Leaders Institute. I want to share the teachings of Christ with the world. I am fulfilling my calling to minister the Word to the people thanks to the Christian Leaders Institute and their free online biblical education.