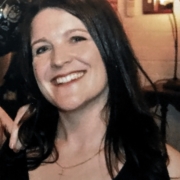 My name is Janine Bower (Parslow). I am 47 years young and live in Perth Western Australia. I belong to a beautiful Christian community part of a church not far from home. This community is very accepting of people of all races, backgrounds and abilities, and people are encouraged to participate and explore their individual gifts.

As was the standard then, I was Christened into the Church of England as a baby. My mum would say a prayer at night when she tucked me into bed and good values were role modeled and encouraged, however, that is is the extent of my Christian experience at home.

At the age of seven, I had my first spiritual experience. My grandmother who I was very close to died which devastated me. A few days later she appeared to me at the door of my room. This for a seven-year old was a bit scary.

Anyway, in high school, we received religious education and my aunt occasionally took me to her church and Sunday school there. I loved the church but was not so keen on Sunday school- I was a strange child! What I didn’t know was at this time God was not only working on me but my mother as well.

I was about 13 and had continued my nightly prayer since a young child, but it seemed empty and meaningless, and I was wondering if God was really there. I decided to challenge God and said these words “God if you really exist I need to know. If you are there you can do anything so I know you could move my wardrobe from where it is to the other side of my room by the time I wake up. If you don’t I will stop talking to you. Amen”. Looking back I don’t know how I dared to challenge God, but that’s what I did. The next morning I was disappointed and resolved not to say my prayers anymore.

That night I went to bed still disappointed as I desperately wanted God to be real, so I decided to give him a second chance. However, when I opened my mouth to say the same prayer I had for many years the words had gone. I could not remember them for anything. Instead, a more meaningful prayer came out my mouth and I felt an amazing connection to God- the presence of the Holy Spirit. I thanked God for answering my request and realized from that point on that God always answers your prayers, even if it’s not in the way you expect.

By aged 14 I was going to church regularly and so was my mother and sister. After a while, my dad started to come with us as well. God was working on my whole family. At 15 I was confirmed into the Church of England, and soon after we emigrated to Australia.
We attended the local Anglican Church and I joined the youth group.

After three years I became a youth leader and was invited to sit on the Church council. This was the first time a young person had ever been invited and was the result of trying to bridge the gap between young and old in the church and give youth a more active role.
From this point on I was seen as a leader and trusted confidant by both youth and adults in the church. I loved God and wanted to share that love with others.

I got married and we moved to a different suburb and therefore church. Before long I was a youth leader and heavily involved in the church. I was also studying to be a Social Worker.
During my training, God very clearly told me I would be needing the skills learned in this course but I would not be a Social Worker. God handed me the Sword of his Word. I remember going to pick it up and it was extremely heavy. It took two hands to lift it and accept His calling.
I was recommended to be Chaplain at the High School and began my ministry journey.
A year later my priest recommended me to the Anglican Church as a candidate for ordination and I commenced their discernment process prior to being accepted.

Unfortunately, at this point in my life I and my baby were subject to domestic violence and my world fell apart. I had to stop everything I was doing and get to safety. I was soon divorced and a single mother.

For the next several years I struggled to raise two children just one year apart, one of whom had Autism. I raised them as Christians, keeping God at the center of our home, discussions, and schooling.

After 13 years I fell in love and remarried, but had chosen to ignore Gods word on my choice of partner. I thought he was a backslidden Christian as he had been christened and attended Sunday school. He was happy to talk about faith and had questions about God, attended church with me on a few occasions and let me say grace even at his house.
Once married this changed. He sabotaged my going to church, banned grace every day and declared himself to be an atheist.

New Beginnings for Women Revival Leaders are Being Raised Up!

It has taken four year and chronic illness to bring me to where I am today.
I again have my close relationship with God and have drawn a line in regards to my faith and my husband. God again has re-affirmed my calling to ministry and confirmed it through a third person.

I am armed and in the midst of a spiritual war but winning thanks to Jesus.
My spiritual dream has always been to have a hug from Jesus and sit at his feet, but that privilege would be for God to grant and I pray I am found worthy enough to do so.
I have come to the Christian Leaders Institute as my husband would not let me spend money on training to be a minister.

I am so thankful and humbled to have been lead to the institute, and for the time and effort put into making this training accessible.

I hope to use this to minister to others but how is not yet clear. I did have a God encounter a couple of days ago with a hospital chaplain who has requested to meet me and discuss volunteering in the hospital as a Chaplain. I will pray over this as

I believe this may be a starting point for me.

Sarah has an opportunity to study Free Online Australia Bible Training by simply enrolling here. Christian Leaders Institute offers over 70 free courses. If you are interested in a College program, check out Christian Leaders College.