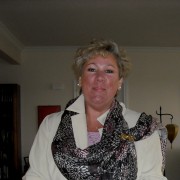 Filled With The Holy Spirit

CLI Graduate, Moira Taylor has been filled with the Holy Spirit and through the Spirit has achieved miraculous things.

My name is Moira Taylor. I am the wife of Stephen, and we have three wonderful sons. Colin, 31, is a post graduate of the University of Ottawa and presently a mortgage specialist with TD Canada. Michael, 26, is currently in the Netherlands studying his Masters degree in Criminology. Shaun, 21, is in his third year at Carleton University studying Aerospace Engineering.

Moira has had many tragedies happen in her life.

I was born in Liverpool, England, to devout Catholic parents of Irish and Spanish heritage. I questioned my faith as a teen and earned the phrase “doubting Thomas” by my father. My young years were defined by the murder of my best friend when I was nine years old, finding my grandmother’s dead body at age 13, and a brutal sexual assault at sixteen. At the age of 19, I made a decision to leave my family and all my past behind and arrived in Toronto, Ontario, Canada. I was employed as a nanny to a very wealthy Jewish family. It would be here I would learn a great deal about my faith and search out more about God. My past life caught up with me, and my behavior became out of control. Drinking heavily and partying at nightclubs led to depression. I started to attend church and spent much time alone. I read the Bible periodically but did not apply the principles.

In time, I would leave the family I was working for and work at a very prestigious bakery on Young Street in Toronto. Things seemed to be improving in my life. I met my husband and eventually moved to the little town of Brockville, Ontario, a town my husband describes as “God’s own backyard.” We bought our house, and I found happiness. We had our three sons, and I recognized my blessings.

Moira had a divine experience of being filled with the Holy Spirit when she least expected it.

I attended church and met many Christian friends, both Catholic and Protestant. I was invited to different churches and attended my first weekend conference. I went before the priest who was anointing people with oil, and I was scandalized that people were falling down drunk. I didn’t understand what was going on. I must admit I was a little nervous. Suddenly, as the priest anointed my head, I saw what appeared to be an enormous block of ice coming down from the ceiling. Although I was extremely fearful, the powerful words entered into my thoughts of “Do not Fear”. Then I was experiencing overwhelming peace as the giant boulder of what I thought of as crystal ice was crushing me. My hands and arms were outstretched to stop it coming at me, but I couldn’t hold it back. The priest continued to pray over me for some time, but I was in a state of shock.

At first, after Moira was filled with the Holy Spirit, she worried she wasn’t ready to be used by God, but through God’s Spirit her calling was revealed.

My friends and I left that area to go to a quiet place when I was filled with scripture verses and what they called prophecy. I had a sense of knowing many things. I thought my hair had gone white. Everyone about me was aware something profound had happened, but I was in some sort of daze. Later, the priest said he felt the power of the Holy Spirit upon him and knew I had been called for something powerful. He said it reminded him of the “transfiguration on the mount”. It would take many years for God to work through me. I had heard a quiet voice say, “I’m calling you to be like Moses.” My response was that I’m not equipped, and I was informed, “Moses said the same.”

I am now prepared to reach God’s people. I don’t have much in the way of education, but I have what God has prepared me for. I am now seeking the affirmation of education as a tool to aid me in the work of the Holy Spirit. In 2010, my father was diagnosed with terminal esophageal cancer. I would not make it to the UK in time for his death. It was upon asking God that I was informed that he was killed. Nobody, including my mother and brothers, would believe me. It was through the Holy Spirit’s guidance over the next three years that I would prove it to be true and win a civil suit against the hospital. This rendered their admission of guilt and forced policy changes throughout the country.

“Renewing of the mind” is the scripture I use as a tool to help others. I have certification in drug and alcohol rehabilitation. I am also board certified in the area of Integrative Psychology. My prayers and dreams have now been answered after three years, and the work I have been led to is coming to fruition. My dream is to help and mentor those struggling. The judicial system does not rehabilitate offenders, so they become cyclical and lost. I have seen the evidence of helping them recognize their creativity as a healing process in their recovery. I have had lawyers refer their clients to me and recently have been asked to join a mentoring team locally. I see myself as a pastor ministering in the areas of marriage counseling, family solutions and drug and alcohol addiction.

CLi is providing Moira the ability to grow in her knowledge and her faith in her ministry calling.

Prayers are communication, and God communicates through many people, so I ask for prayers for the ministry of my calling. I am confident that a scholarship from Christian Leaders Institute would help me greatly on my path, and I would be very grateful for the opportunity