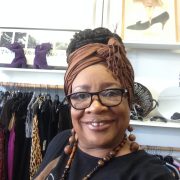 Read below how Candice Thomas, having gone astray from the faith while searching for stardom, was brought back to the Lord and now with an evangelist heart seeks to bring revival fire to the church:

My name is Candice Thomas, and I live in the USA. As a little black girl growing up in a small town in Ohio, my world was comfortably compact. Our little Baptist church was within walking distance. I really liked singing in the choir and going to Sunday school. Our humble home was very similar to everyone else’s in our ethnically diverse neighborhood. We played in the streets together and attended integrated schools. As far as I knew, that was exactly how it was in neighborhoods everywhere else in the country. I was isolated and unaware of the racial turbulence that was raging during the late 50’s and 60’s.

After graduating high school, I was expected to immediately get a job to help support the needs of our family, but by the age of 19, I decided that I wanted more. I made the decision to quit my banking job and explore the challenges of city life. After much debate, my mother agreed to let me leave provided I moved in under the supervision of an elder sibling living in Detroit, Michigan. When I arrived there in the early 70’s I was shocked at the racial bickering and how generally angry people were there. There was such easy access to every vice. Temptation pulled me out of my church-girl naivety to experiment with all the sins I had been warned against by my mother.

The sinful excitement of Michigan played out quickly. So at 22, with big city life experience under my belt, I thought I was ready to handle even more. I had always loved to sing, so I fearlessly relocated to Hollywood. I enrolled in college drama classes and discovered I had some acting talents as well. When audition after audition failed to bring me stardom, I became discouraged. My new found freedom to sin and my lust for fame had not accomplished anything but make me feel more and more empty and depressed.

Late one night after an evening of bar hopping, I was sitting alone and dejected in my Hollywood apartment. Bored and unhappy, I began realizing just how empty my life actually had become. I turned on the television in search of a distraction. The 700 Club appeared on the screen and the host was talking about a subject I couldn’t recall anyone mentioning back home in Sunday School. He said Christ was coming back soon, asked if I was ready, then said, if my answer was “No”, I could invite Jesus into my life right then. I instantly recalled the faith and peace of my mother through all her struggles, bowed on my knees in front of the TV and repeated a prayer with him. I asked the God who gave my mother strength to take control of my life and I was changed.

The walk I began with God that night carried me through intense marital conflicts that led to a separation and relocation to Northern California. During a 12 year period of single parenting, God drew me close and sustained me by filling me with a passion for His Holy Word and the indwelling of His Holy Spirit. He taught me how to use my gifts to build up other hurting people, and in time He reconciled my marriage. He opened doors of ministry for me in my local church and in other churches in my community, all the while beginning to plant seeds of an evangelist heart in my spirit.

Right before I found CLI, He told me to pull back from church leadership. When I obeyed His voice and resigned, some questioned the rationale of my decision. I didn’t really understand it all myself. It appeared as if I was turning my back on my evangelist heart passion to minister His word of hope to the hurting. A couple days later, curious about the possibility of getting ordained, I began searching the web. That is when the Spirit led me to the Christian Leaders Institute website. It was as if every word spoken in each Connection class session was full of the Spirit’s holy power and anointing. When the Getting Started classes helped confirm His calling to be an evangelist, the events of the last 48 years of my life suddenly began to make perfect sense.

I am overcome with thanksgiving for God’s grace towards me. I give Him all the glory! Pursuing an online Divinity Degree through the CLI scholarship and pursuing ordination is a huge miracle for me. I lacked the financial resources to attend a traditional college and couldn’t leave my business. But now, as a bi-vocational student, I can get a great Biblical education online while still running my business. My husband is wholeheartedly supporting and encouraging me to press on to the high calling in Christ Jesus. He has opened doors for me in recent years, encouraging me to reach beyond racial and denominational barriers to take His message of spiritual healing and unity to His hurting church. My evangelist heart is bubbling over with excitement about what my future holds.

I ask for the prayers of CLI and their ministry teams as I obey His call as an evangelist, bringing revival fire to His body by promoting love for Him, love for one another, and a renewed passion to heal broken hearts and reach the unsaved. I look forward to joining the ranks of the esteemed graduates of CLI and the CLA community.