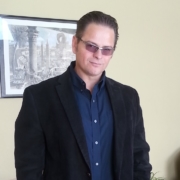 This is my evangelist chaplaincy call journey. I was born in 1968 and raised in Arizona, United States of America. I guess I can go back to the first time I felt the Holy Spirit touch me. I was about 10 years old when there was an evangelist speaking. There were an altar call and the song “Just as I am” at an old Baptist church where my parents took us to in Tucson, AZ. I felt an overwhelming desire to answer the call and came forward and received Jesus Christ as my Lord and Savior. A few weeks later I was baptized. However, I was young and didn’t have much mentorship. I continued to live a worldly life.

When I was 16, I decided to sit and read the Bible starting in Genesis. As I read the Bible, the words spoke to me as true. I read about the amazing things God did in people’s lives, how He spoke to them and guided them, and I was in awe. I prayed that if God was real that He would reveal Himself to me in such a way. A few weeks later, on the way home from work, I felt strongly compelled to stop by my high school teacher’s house. I knew where they lived, but never had been to their house, nor spent much time talking to them outside of class. I knocked on their door and they asked why I had come and I told them I felt God told me to come there. They knew the Holy Spirit led me there and explained salvation and prayed with me and this time it stuck. I began going to their church and felt God’s presence much like I did when I was 10. I still struggled with sin. However, my mentors, Clay and Nancy, guided and supported me through it all.

When I was 17, I graduated high school and went into the military on my evangelist chaplaincy call journey. Boot camp was the most difficult thing I had ever experienced in my life, but I could feel God’s presence. I was attacked often for my beliefs and faith, even mocked, but I would still bow and pray every night and read His Word. God gave me many awesome opportunities to witness and minister to others and I knew He was with me. During this time, I started to feel the call to evangelism as God was using me this way. I also felt compelled to pray for others that were living in darkness. I was even led to some that I believed to be demon possessed as a darkness would come over them and they would speak with a different voice. Through it all, I felt the Holy Spirit around me as a powerful shield that could not be penetrated. No matter how hard the darkness fought, God fought way stronger and always proved victorious.

After the military, when I was about 23 years old, I moved to Turlock, California and joined an evangelism group from church on my evangelist chaplaincy call journey. We would go door to door, walk up to people in parks and on the streets and just talk with them about Jesus. It was exhilarating and beautiful. Street ministry is where I felt the strongest pull, especially in San Francisco where I felt the darkness the strongest. Then I had an opportunity to take a Youth Pastor position in Twain Harte, California. I felt that this was what I had always been waiting for. The opportunity to work full time in the ministry and lead young people to Christ as well as help them lead others to Christ.

Then in 1997, it all fell apart. I can’t explain what happened. Everything seemed perfect, then I felt lost. It was like all that I had been working for came to a halt. I would pray and ask why I felt so empty and lonely but didn’t seem to get an answer. I divorced my wife, left the church, left the ministry and walked away from God. Soon after I went into the Navy, traveled the world, lived overseas as a prodigal child. During this time, I caused much pain to others. I followed after whatever sinful desire came to my mind. I came to such a place of utter emptiness.

When I was living in Colorado in July of 2014, I was on a hike by myself on this mountaintop and I felt the presence of God in the wind. It was peaceful and I knew that God had never left me. Shortly after, I repented and asked Jesus to forgive me for turning away. Just like the prodigal, I knew that my place was with my Father. It was beautiful. The Holy Spirit came in like a flood and healed my heart. It was then that He made it clear He was with me all the way through my wandering, protecting me from myself and all that the devil was throwing at me. I was made aware of the times the enemy tried to take my life, but God protected me. I’m overwhelmed at God’s handiwork and plans. I am thankful that He is merciful and a God who forgives.

In 2016, my little baby Gabrielle was born, and I felt God leading us to live in Henderson, Nevada. We moved out here and shortly after we had a miscarriage. In 2017, I saw my wife’s mental and spiritual condition deteriorate and I prayed fervently. She was strong in the New Age spiritism and claimed to hear angel voices. As I had been drawing near to God, I knew that what she was experiencing wasn’t Him. A few days after Christmas she asked me for a divorce. The next evening, she physically assaulted me, accusing me of horrific things and said over and over she wanted to kill me. She was arrested that night, as well as a couple times afterward.

Now it’s just Gabrielle and I, with Jesus holding us close and protecting us. I felt God calling me back to ministry but knew I couldn’t afford it as we accumulated a lot of debt in our marriage and now that all falls on me. I’m thankful Christian Leaders Institute offers this training free of charge and hope one day I can help pay it forward. I feel my ministry dream is toward an evangelist chaplaincy call. To minister to the sick in the hospitals, especially the elderly and children. Perhaps those in prison as well.

I’m surprised I finished this class after what has happened in my life since I committed to this. It’s no joke when you said that spiritual warfare would hit hard when we commit to such a thing. I have felt strengthened by my CLI brothers’ and sisters’ encouraging words and prayers. Reading God’s Word has ministered to me time and again through this painful experience. Knowing God’s love and seeing what He has done in my life is what makes me want to share Jesus and His love that heals hearts, changes lives, brings salvation and eternal life. God led me to the church at Lake Mead shortly after my wife left me and they have been a tremendous help in God’s healing.

Thank you for this opportunity. I look forward to seeing what God has planned for me in my evangelist chaplaincy call. God bless.