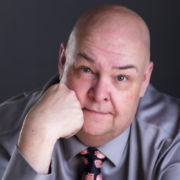 My name is Neale Bacon, and I have a children’s ministry dream. I live in Burnaby, British Columbia, in Canada (near Vancouver for the geographically challenged). I am happily married to a wonderful woman named Bev, and we just celebrated 37 years of marriage. We have two kids and four grandkids.

I called this “Testimony of a Dummy” because, for most of my life, I have been a professional ventriloquist and magician. Through this work, I have also had many opportunities to minister to different denominations with this unique gift. In between my performing, I also worked in Vancouver’s Down Town East Side, known as the poorest postal code in Canada. There I worked at shelters and ended up as director of The Salvation Army Crosswalk. It was a shelter as well as a drop-in center. It, unfortunately, closed in 2001 due to funding cuts.

As a child, I was SENT to Sunday School at a church across the street. Later as a teenager, I attended a Christian coffee house, and there I committed to the Lord. However, none of my family were Christians, so the flame quickly went out. It lay dormant until I came back to the Lord at the age of 19. After that, I spent a lot of years of church hopping.

The Lord brought me to The Salvation Army, where I did some volunteer work and eventually came on as staff. So, after my wife and I did a lot of church hopping, I asked her, “Why don’t we try the local Salvation Army?” This question led to the Army being our church home since 1993, although, I was around the Army since 1979. We are soldiers in the Salvation Army in New Westminster, BC. I am also the Corps Sergeant Major. This job is like a lay leader or lay pastor.

As I mentioned, I am also a professional ventriloquist and have been doing this since 1977, both secular and church events. I am heading toward semi-retirement or at least slowing down (I just turned 60). I have gotten a bit tired of driving hundreds if not thousands of miles doing shows. While I am still able to, I want to serve the Lord more.

Therefore, to that end, I took a part-time job at my church as an outreach worker, ministering to families, youth, and children. It was a contract position that ended but hopefully will restart when they set the new budget. Our church has been working with a lot of new immigrant families to Canada and seniors; both areas are also part of my calling. I would say the umbrella of pastoral care covers a lot of what I do, though I often preach as well.

God has been encouraging me to come off the road and use my gifts for him. I am called to do that either in my church or elsewhere. Besides getting to preach regularly, I get to minister at a local nursing home once a month and may do some visitation as well. I hope to keep working with some of our immigrant and refugee families who are now part of the church. I think God has a lot for me to do yet.

My biggest spiritual dream is to be able to reach out to children with the gospel. The world tries so hard to drag the children away, and it breaks my heart. A motto I use for my ministry of ventriloquism and magic tricks is: “If we don’t teach the children to follow Christ, the world will teach them not to.” D.L.Moody once said, “If I had my life to live over, I would devote all of it to children’s ministry.” Another powerful testimony for a children’s ministry dream!

I was never able to go to college because, as they say, I was born with nothing and still have most of it. These ministry training courses at Christian Leaders Institute will help me as I enter these silver years and focus on more work for my Lord.