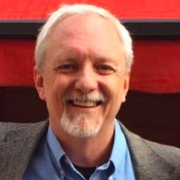 Called to Minister in Ukraine

CLI student Mark Allan experienced God at a young age, but quickly fell back into worldly ways then Mark met a girl that lead him back to God. Mark then was called to minister in Ukraine.

I first heard the gospel at age 13 during a summer camp, and the sacrifice of Jesus for my sins struck me. However, my family was a typical family in the U.S. during that 1970’s and church, for us was nothing more than a small part of the American Dream. That is, we were affluent, well provided for with a nice home, etc., and we attended church on Sunday mornings. The seed of the gospel planted in my heart that year fell among the weeds and was soon choked out.

In 1976 I was now out of High School, playing in a rock band and working a day job. I was also a drug user. The band was becoming more well-known, and I was beginning to question my dreams of being a rich and famous musician. I was asking the question, “Is this all there is, and if we make it big, will it mean more of this?” You see, living for myself was beginning to seem empty.

Then I met a girl whose parents were a step more committed to church life and God than my own had been, and the only way they would allow their daughter to date me was if I would go to church. Being the open-minded person I thought I was, I said sure (she was that beautiful!). Then in March 1977 their church was having four nights of revival meetings. I somehow made excuses for the first three but went on the fourth. That night the message was about hell, and all through the sermon, I kept hearing this voice in my head saying, “If you don’t submit to Christ as Lord tonight, I will leave you alone forever, and never bother you again.” I knew this was my last chance and that God had been calling me for a long time. So, when the invitation came, I almost ran to the front and surrendered to Jesus Christ. Three months later I married the girl, Rhonda. I got the Lord, and He blessed me with the girl too!

Fast forward to 1991 and we have attended church and grown in the Lord for 14 years, I am working as a Computer Field Technician, and Rhonda is a homemaker. God begins speaking into our hearts giving us a burden for the Soviet Union, which is beginning to come apart. Over the coming year, through Him speaking into our hearts, and through His Word, we realize He is calling us to sell everything and move to Ukraine as missionaries.

At first, I questioned if I needed to go back to school and get a seminary degree, but God clearly told us ‘No.’ I explored the possibility of using my computer background with a mission organization such as Wycliffe Bible Translators, but God clearly told us ‘No.’ In the end, we were commissioned as the first missionaries to be sent out of Houston’s First Baptist Church who were not going through a mission sending organization. Our calling was so clear that the pastor of our church at that time, Dr. John Bisagno said, “Kids, this is so clearly God how can we say no?”

We felt it would be a two-year commitment, and we were going to help in discipleship. I was comfortable with this as I had taught Adult Sunday School for many years. So, in March 1993, after raising support for six months, we left America and moved to Ukraine. After 23 years we are still serving in Ukraine.

In 1994 God put on our hearts to start a church. To do that we knew that I needed ordination. Once again, after discussions and questionnaires with our home church, the ordained me into the Gospel Ministry in August 1994. I bought many books and self-studied the disciplines taught in most seminaries. I sometimes would joke that I had the most varied group of seminary professors ever, from Baptist, Pentecostal, Plymouth Brethren, and other denominations; a group of teachers which never taught at the same seminary, nor even in the same century in some cases.

My qualification has always been my calling, and that has been enough. So why the decision to study and why CLI? Those are the questions my family had as well.

First, in some of the countries of the former Soviet Union, requirements for religious visas have come to include an education in religious studies. Without a degree of some type, you cannot receive a visa on religious grounds. If that is ever adopted in Ukraine, it will create problems.

Why CLI? After 23 years, we are still faith missionaries, supported by individuals and a few congregations in America. Our three daughters have been called as missionaries as adults, and two of the three live and serve with us in Ukraine. So, finances would not allow me to study at a typical online seminary. The CLI scholarship will allow me to do the studies, and we are praying that the Lord will make it possible for us to contribute monthly to CLI to help others do this as well. But the bottom line is that without the offer of free studies, we could not make the financial commitment for me even to begin.

I now pastor our second church plant, having raised up leaders in our first and turned the church over to a national pastor in 2001. We planted this second church, Living Word Church in Lviv, in 2003 with the assistance of three leaders from our first church plant. Our calling is now clear, and our lives are planted in Ukraine until the Lord Jesus returns. Pray for Ukraine as hearts here are more open to the gospel as a result of the ongoing war with Russia in east Ukraine.

God is faithful to qualify the called, but He sometimes calls us to become further prepared as well. I look forward to the studies, the challenge, and the glory I pray that this will bring to God.