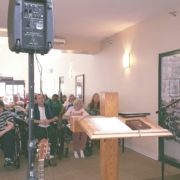 My name is Anthony L. Francia and I am an Associate Pastor at my church. I am 46 years old and I live in Albuquerque, New Mexico, in the United States of America. My testimony begins when I was 15 years old. We moved to a crime-ridden part of town and when I went to school I started to get into drinking and smoking just to fit in. I rebelled against my parents and moved out as soon as I went to high school. By the time I was 21 years old, I was addicted to cocaine, marijuana, and pills. I was committing crimes to pay for my habit. When I was 24 years old, I moved to Denver, Colorado to try to get away from the life that I was living, but little did I know that without God it would get worse. The next thing I knew, I was selling cocaine and other drugs to feed my own addiction.

Well, my life got worse and I stole a car to go back to Albuquerque. I was then introduced to methamphetamines. I was helping people make this drug. To make a long story short, all the meth dealers were suddenly arrested and I had no one to get drugs from. So I tried to cook them myself and I was successful. One day when I was supposed to be moving out of the house we were renting, the landlord came to check on the house to see if we were out yet and when he knocked on the door I was asleep. He checked the door and it was open. When he looked in, he saw the meth-lab and all the drugs in the house and called the police.

When I was in jail, I gave my life to Jesus. With all the charges I had, my attorney said that my sentence could be 37 years. So, I pled guilty to the charges for a 12-year sentence. God was working everything out. My dad was in the courtroom with me that day. When I called him later, he told me that God had to corner me to get my attention and that I needed to get as close to Him as I could. He also told me that God would let me out early because He has a job for me to do. I told him, “Didn’t you hear the sentence?” He said it doesn’t matter what it looks like, it matters what God says! He also told me that God showed him that I would be helping people like myself and preaching the gospel.

Well, that was in 2001 and they had a new program called drug court. When I went to visit my attorney, she told me about this new program and asked if I would be interested. I knew this was God’s plan. I successfully completed the drug court and I was put on probation for one year. Since then, I’ve had a good job for over 16 years and I’ve been in ministry just as long. I am now an Associate Pastor at Soul Harvest Ministries. On the weekends, I share the gospel and God’s love at a nursing home and rehabilitation center called Princeton Place. Christian Leaders Institute has been an important part of my education and ministry. I have been attending since 2014 and I have learned so much.