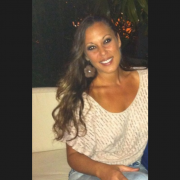 My name is Kristina. I was born in the United States and grew up in Pennsylvania. I am thirty-five years old with an amazing family and a close unit of Christian brothers and sisters. I currently live in Miami, Florida and have resided here for the past thirteen years. I often ask myself how I got here, and where I’m headed. This is my story of how the supernatural power of God has anointed my life.

Growing up in a small town and remote area of the United States was at times very difficult for me. I often had the feeling that I had to get out, however, I had three siblings and two working parents that helped. My mother is of Italian ancestry, and my father of Polish and Russian descent. Both were second generation immigrants, however, they brought their Catholic faith with them and raised us in the Catholic church. We were all baptized as babies, went to mass every Sunday, catechism and progressed to be confirmed Catholics, but God had other plans for my family. When my second brother was in college, he had an amazing encounter with Jesus Christ.  Jesus showed him that He was the only way to God. He then came home telling all of us about this “Jesus”, that we thought we always knew, but never really did. He told us that we could actually feel Him and have an intimate relationship with Him that would go beyond just saying a prayer. I didn’t believe him. It seemed too difficult to have to change who I was and stop doing the things I liked. I was stubborn and couldn’t believe that Jesus was more than going through the repetitive motions of a Catholic mass or that He wasn’t just a God of judgement. But then, God began to touch each one of us, and one by one my family experienced the salvation of Christ. I began attending a Non-denominational, Bible-based church where I got water baptized and baptized in the Holy Spirit. As I grew I realized my view of God had been all wrong and that He was in fact an all forgiving, never failing, loving God.

God began to reveal things to me about who I was to become and what He intended to do with my life. While attending college for the performing arts with a dream of singing opera, He began to open my eyes to the supernatural world. At first I saw angels which then progressed to seeing demons as well. I did not understand what was going on because none of the churches I had ever attended spoke about this. It seemed surreal and frightening. I was also living in sin at this point so I thought I was being punished in some way. I begged God to take it away. I was scared and living in fear of what I would see next. I continued to love God, go to church, and read the Bible, but I knew I was missing something.

A couple of years later, I relocated to Miami, Florida, to live with a man I had met while in college. I waitressed, bartended, and pursued my music career as best I could. In the meantime, I still attended church and loved the Lord. In Miami I experienced a multitude of cultures. There were people from the Caribbean, South America, and Europe, as well as many who practiced religions like Catholicism, Voodooism, Santeria, and Islam. God allowed people in my life that practiced these religions, which in turn, exposed me indirectly to their beliefs and potential attacks. During that time I had to deal with fear, anxiety, spirits moving objects in my home, mental torment, physical pain, trials and monetary attack. It wasn’t uncommon for strange things to happen in my home. I remember late one evening I was alarmed by a loud noise coming from the back of the house.  As I got closer to this frightening sound, I realized that it was a small metal cross hanging from my bedroom doorknob. It was being pushed back and forth but not by any wind, fan, or air conditioning. This spirit paralyzed me with fear. I didn’t know what to do. I had never been taught how to deal with anything like that. I immediately thought of my time in college and all of the old fears came rushing back. I remembered what demons felt like, smelled like, and the fear they brought. But that night, I refused to be controlled by any evil spirit. Not anymore! Not this time! Shaking uncontrollably, I raised my hands, spoke loudly and said, “In Jesus mighty name, I rebuke you! The God of peace will crush you under my feet! Leave my home now and never return! In Jesus’s name.” The cross immediately stopped moving.

This type of thing continued in my home for years. There are too many to list, but each time I would seek God’s wisdom and He would help me know what to do to get the victory.  Eventually, Jesus released new gifts in me that helped me to not only deal with my own personal attacks, but also to help others in need of personal or home deliverance. I began to seek God’s face, to pursue Him like I never had before. I found the courage to ask Him to give me back the visions of prophecy and discernment that He had once blessed me with and because our God is so big, He did just that. In addition, because of His wonderful mercy and grace, He generously added healing and deliverance to the list.

I felt as though I was being called to a bigger purpose; a purpose of finally putting Him first in every area of my life, and also to go to Bible School. Initially I questioned if I was hearing Him correctly. There I was under constant attack from witchcraft and voodoo and He was asking me to study? I decided to go with this crazy notion and God began to move when I would step out in faith. I would be out having dinner and complete strangers would approach me. God would then use me to encourage them with a word of knowledge or prophesy, lay hands on them, or minister healing. I remember walking with some friends one evening and feeling led to speak with a man waiting to catch the bus.  While my friends were in a store, I prayed, “God, I feel you want me to speak to this man, but I doubt what I’m hearing is from you. If you have something to say to him through me, please let him walk up to me.” At this very moment, he walked toward me. My heart was racing with anticipation of what the Lord was about to do. My friends came out of the store and were rushing me to leave. I asked them to wait just a moment and began to minister to this man. God showed me some trauma that had occurred on the left side of his brain. I asked him what had happened as a child to this part of his head. He then explained that when he was a toddler his father would regularly beat this side of his head with a bat. A terrible sadness rushed over me as I stood listening to his story. Then I felt the Holy Spirit show up and say, “Reach forth your hand Kristina, I am going to heal this man.” I asked him if I could pray for him. He looked and saw his bus was there, but said he would wait for the next one because he wanted prayer. I reached out my hand and prayed healing over his head. At the moment, his eyes turned from brown to blue. When the prayer was finished, they returned back to brown. There were witnesses on the street watching this amazing moment. He cried, hugged and thanked me. I let him know it was because God had not forgotten about him, and that He wanted to see his life move into a place of healing. I also shared that God wanted to restore his personal life with his family. What an amazing moment that was for this man!

I learned that night to always obey God when He wants me to speak to someone because He will do great things for those who will receive it. This became a very common event for me; speaking God’s mercies, miracles, and love into people’s lives while they were at bars, restaurants, clubs, or on the streets. Through me He was giving these people hope, while at the same time, He was building my faith and showing me that He really does want to use me in this lifetime to walk as Christ once did with the anointing of His Holy Spirit.

These are but a few factors that prompted my desire of a ministry for God. CLI is giving me the opportunity to live out God’s purpose for my life with access to this online school, and the scholarship will allow me to get it done now. I firmly believe finding this school was a divine-timed appointment. Although it is just the beginning of my formal study, I believe God will use this school, my learning of the Hebrew language, as well as all of the meaningful things He has taught me in the last eighteen years of being born again for His ministry. I feel that God is moving me into a ministry of deliverance, healing, and prophecy through evangelism. You could all pray that this ministry will reach the lost in the Miami nightlife scene, the homeless on the streets, and eventually reach many nations. Africa and the Middle East are on my heart, but the Jewish people and the land of Israel particularly weigh heavy on my heart. There are so many people that need God’s amazing miracles, love, supernatural encounters, and much more that he has to offer.

My local church is behind me on this purposeful adventure. I meet with the pastor’s wife as she mentors me through this time of my life, and I also have the support of the worship pastor, as I am a member of the worship team.

In conclusion, my story is but a small piece of the body of Christ and CLI is a tool God has given as a blessing to use me in serving His ministry. I am grateful to have the opportunity to pursue God and His work with all of my heart, soul, and strength.

God’s Hand in MY Life – Training for Ministry in Florida