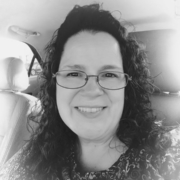 My name is Angela Thompson, but most people call me Angie. I am excited about the free ministry training at CLI. It will equip me for my servant ministry calling. I was born, raised, and still live in a small town in Northwest, Florida called Milton. In our entire county, there are close to 175K people and 71 churches. Since there are no mega churches in our area, it’s unfortunate to acknowledge that we have many unchurched citizens.

Church leaders in our area are generally well-respected, and some are very outspoken on political issues. We see significant involvement at the high schools, where bi-vocational youth pastors are working as football coaches and serving on staff as paraprofessionals. My Christian journey started with an active youth leader, so I am well aware of their value.

My youth pastor was the one who introduced me to Jesus and Christianity. His name is Rev. Richard Crisco from Milton First Assembly of God. When I aged out of the youth program, “Bro. Richard” had also left. He continued his ministry at the acclaimed Brownsville Assembly of God in Pensacola best known for the Brownsville Revival that lasted five years. Under Bro. Richard, I learned the importance of servant ministry, church loyalty, true faith in God, and being a Christian example through action. He is now the Senior Pastor at a church in Rochester, Michigan. I am still connected to him and his ministry via a YouTube channel and Facebook Live. God’s Word propagated through technology is fascinating to me.

Brother Richard took our youth group to Camp Grace just a few weeks after I turned 14. During that retreat, I gave my heart to God. I knew right then I was changed. I was on fire for God and even joined a study group at the church called Youth on Fire for Christ. Getting enough Biblical knowledge into my mind was essential to me. I was hungry for His Word. There were obstacles, though. At 16, my family was struggling financially. Therefore, my little part-time job expanded to five days a week even though I was still in school and band. My availability to attend classes became less and less until finally, I was too far behind to catch up. I stopped attending the group and had to rely on my studies.

In 1990, I graduated from high school and met an older man. He was an evangelist, who I quickly fell for. I had always wanted to be in service for God, and I felt that being his wife would fulfill that role. I was naïve in believing this surreal new opportunity was God’s chosen direction for me. It wasn’t until after we married that I discovered he was fraudulent in his profession of faith. The ministry I thought was sincere was more of a performance for him.

Our relationship was tumultuous at best and escalated to physical abuse by the third year. I didn’t believe in divorce, so I tried to make things better. Staying in that situation for a total of seven years, I struggled. I questioned why God allowed me to sit in reverence to Jesus at church and then be dragged by my hair through our home that night. We had two daughters, and I thought that they would need to be from a Christian home, so I stayed.

Finally, after a very violent night, I heard a preacher on my car radio say that God did not call us to be abusers, and God did not call us to be abused. I was weeping and driving to my parents’ house when I heard this radio preacher on the phone with a caller. Her story was not very different from mine. When he told her that because they were unequally yoked, her husband might never stop abusing her, I felt free.

I chose to leave my husband that day, and I have always felt guilty. The guilt is not for the divorce, but rather for choosing my husband on my understanding, rather than praying and receiving God’s counsel. I chose poorly, and the consequences were devastating for my children.

That guilt led to bondage that prevented me from serving God. I thought I had messed everything up, and I was angry at God for not protecting me. I quit church, didn’t raise my children with Christian values, and quit God. However, and that is the absolute biggest “however” in my lifetime… God didn’t quit or leave me. He chased me down and reminded me of His love. This part of the story is too sweet to miss.

A couple of weeks before Valentine’s Day when I was 12 years old, Bro. Richard came to me and asked if I would go to the Valentine’s Banquet at our church with a boy from our youth group. I didn’t know the boy, and didn’t want to, but decided to anyway. That day, in the sanctuary of our church, I met Donald Thompson, who technically would take me on my very first “date.” That was in 1984.

Fast forward 30 years! In January of 2014, Donald sent me a friend request on Facebook. We met up again in February, and on March 23rd of that same year, we started dating. We were married three and a half years later in that church and in the same room where we were introduced. It’s the fellowship hall now, but the sentiment was too great not to do it that way.

In preparation for our wedding, Donald and I agreed that we should start attending church again. It seemed only right that we should regularly attend for a while if we were going to use the church for our wedding. Looking back, we can see God’s hand in every aspect of this time. We went to church regularly. We got married in September of 2017 and continued attending church, feeling a pull on our lives. Finally, during the summer of 2018, we both decided that we wanted to give God everything. In doing that, we would always be equally yoked and protected by God’s grace. We wanted to serve Him but did not know how.

We needed to get plugged in, so we attended a pastor-led Growth Track series in a small group setting. It helped us find our place. We were back in tune with God, loving Jesus, and changing our lives. On December 2, 2018, just as worship was ending, the pastor started talking. I audibly heard God say to me, “I am going to use you. Start preparing yourself.” I wept.

I spent the next couple of weeks trying to figure out how to prepare myself. I asked Donald for a new Bible for Christmas. As soon as I tore the wrapping paper from it on Christmas morning, I started reading and found great peace with this decision. I needed to immerse myself in His Word. Then, one day, I was looking up something on my phone’s Bible App. I switched over to Facebook. I saw an ad for Christian Leaders Institute and decided to investigate further.

Like many, we work 40+ hours a week and live paycheck to paycheck. So, there was no extra money for tuition. The scholarship class allowed me the opportunity to check out CLI more intentionally. I was excited to learn that my beliefs correlated with the teachings. The depth of servant ministry training I was getting was impressive. I have decided to continue through to Ordination. Then, I will be able to help others understand God, get to know Jesus and be blessed as I have been.

My spiritual dream is to use all of my business knowledge to run a servant ministry that will meet the physical, emotional, and spiritual needs of the women in my community. This scripture replays in my head almost every day, “15 Study to shew thyself approved unto God, a workman that needeth not to be ashamed, rightly dividing the word of truth” (2 Timothy 2:15 – KJV). CLI is a critical piece of making that happen. Nobody should follow someone without training, regardless of their passion.

My husband shares my love and passion for service to God, and we desire to help grow His kingdom. We look forward to whatever God has in store for us, and we are prayerful for His revealing that path soon.

Itinerant Ministry: The Perfect Class at the Perfect Time
Scroll to top