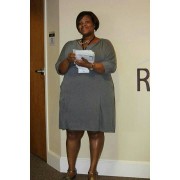 My name is Sandra Ewen; I work as a school clinic nurse. My life is a living testimony has to what God can do. I’ve always believed in the Lord but it was one day while I was seated in New York and I was lamenting to a friend over the phone “why God would let me go through so much suffering.” It was then has I uttered the words, I felt a rushing wind towards me and it felt like electricity had shot through me there and I began to praise the Lord in a loud voice. Several months later when I had arrived in Florida, I started to attend a church and got baptized. I’ve always wanted to work for the kingdom of God, but just didn’t know how to get involved, I felt like I didn’t know enough or could quote scriptures to win souls. But, I’ve now realized that God can use anyone and any small thing.

This following life event has propelled me to move out of my comfort zone and not to be afraid to act upon a need:

One particular morning, I had a student who visited the clinic and asked if I’d any underwear due to the one he was wearing had holes in it. I didn’t have any at the time and told him so, sadly he walked away.

He came back a second time for a band aid for his knee which had a small sore on it. By this time I could see how unkempt he was, he was in need of skin care and his clothing was dingy etc.

Third time it was for another band aid the one I’d given him had fallen off, I took care of him and sent him on his way. Within 5 minutes he was back again in the clinic, this time without any shoes, one of his big toe was bleeding. I’m going to be honest, I was now annoyed with him….I had a rough start in the morning, it was June and the A/C wasn’t working; it was 80 degrees in the clinic. There was a big fan on the floor blowing by my desk where he was seated. As he sat there on the chair swinging his feet back and forth, I was assaulted with each swing of a foul odor (can you imagine the scent!?)

I remembered feeling overwhelmed that no one wanted to deal with him and his odor and, boy, I was upset. But while walking to the bathroom to get him a change of shirt because he’d said the one he had on smelt like fish; I asked myself “What would Jesus Do?” and a quiet voice said “Wash his feet!”

This was the most humbling experience for me. I bent down with a basin filled with soapy water, paper towels and washed his bug bitten feet with tiny sores. A week later he was taken with his other 5 siblings and placed in foster care before I had a chance to do anything for him and because of him, his needs and the needs of others “I See the Need Ministry” was birthed. A ministry that raises funds for underwear and socks for the school clinic. I continue to pray that the Lord will watch over them and one day I will see him again better off than he was.

A scholarship to CLI would enable me to learn more about the Bible and to effectively evangelize to those who don’t know Christ. As a single mother of three, I wouldn’t be able to afford or able to attend any classes which would take me away from home from my children. I pray that I can be a blessing to others as CLI.

My vision is to have a ministry that not only speak the Word of God, but also demonstrates the love of Jesus Christ who didn’t ignore the suffering of the people, but did something about it!

From Polygamous Muslim to Preaching for Christ