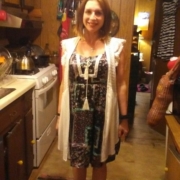 Read how God brought this woman through horrific trauma and gave her a pastoring dream:

I was born in early June of 1989 to a woman who had multiple drug problems; mental problems; and no ability to raise children. Her problems were so severe that although I was born normal: my sister was born with debilitating mental problems and a heart murmur, and my brother was born with physical disabilities that didn’t allow him to live past his 20s. My brother and I were abused on a daily basis by her various lovers, in every way you could imagine and more. We were starved, left places, sexually, physically, and emotionally abused, etc. Both of us protected our baby sister. Due to her defects, we knew that she would not survive the abuse, so we took it for her.

This went on for five years. Finally, the state took us and we went through a slew of foster homes. There we saw parents that wanted children, just not us. They tried to separate us until my sister nearly starved herself to death. She suffers from an eating disorder to this day.

Needless to say by the time we were finally adopted, I had lost much of my faith in human beings. I had seen many things that no child my age should have seen. I’ve always believed in God even before He gave me my pastoring dream. I’ve never questioned His existence. The first half of my life didn’t allow for it. I remain firmly convinced that He intervened in my life many times, to allow me to live. When our adopted mother took us in, we finally saw a good life. Then in 2001, she was murdered right in front of me by the man I called my father. This ended with a court case and a traumatizing murder trial.

At that point, I began to question everything. We moved in with my grandparents who were strict disciplinarians, raised in a different time, where children did not speak unless spoken to. I retreated into books and church just to avoid being home too much. I use the word “home” loosely as I doubt very much that any of these places were home. I felt something was missing.

I always made good grades in school, often at a genius level. I excelled in my studies in all subjects. My social graces, however, were lacking. They said that I had discipline problems and didn’t know how to talk to people. I had to see counselors and was constantly barraged by violent nightmares and episodes. I was labeled a “psycho”, and due to this I’m ashamed to say, I fell away from God. I dabbled in drugs, hung out with horrible people, and mostly made a mockery of all the gifts God gave me. Finally, though, I woke up. I came back to God to get my life together and became the mother of two beautiful children, a son and a daughter; as well as two wonderful stepsons, all of whom live with me.

Three months before I found Christian Leaders Institute, I had a vivid pastoring dream. One in which everything was life-like and beautiful. I was a pastor, sharing my story. Some of my family were there. There were only so many things I could remember from my pastoring dream when I woke up. Once I did wake up, I could not get this passion for the Bible and becoming a pastor out of me. So, I started looking around. I had no money. I’m a woman. I have two young children and two school-aged ones. The odds seem stacked against me. I know, however, that this is what God wants of me and He will provide a way. He provided CLI.