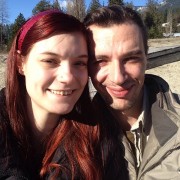 Sometimes you experience incredible obstacles and sadnesses in life. Some blame God. Some curse God and die. Others come to see God as their only hope. And when they find hope in God their lives are changed forever. Many who find hope in God will be given a passionate calling to change the world for God.

Alysha Wolf (now 22 years old) was born in a home where her father abused her mother. Her mother fled from the United States and escaped into Canada.

When I was young and still living at home I was raised as a Christian, to uphold the faith of God and always believe fully in Christ. When I was 5 years old my mother left my abusive father and literally fled from the U.S.A into B.C., Canada with me and my older sister of three years…it was only by the grace of God that we made it across the border that night.

Her mother divorced this abusive man. By the time Alysha was eight, her mother had remarried and moved to Quebec.  From British Columbia, this new family ended up thousands of miles away in Quebec and then in Ontario. By age sixteen, Alysha left her home in Ontario and went to British Columbia. The first step in a passionate calling to serve Christ begins with trials. Alysha fills us in.

Years later in 2002 (I was 8) my mother moved us to Quebec, there she married my step father, I was always raised to go to church and I felt that I had a deep connection with Christ or so I thought. But by the time I turned 16, I left home from where my family was living in Ontario and I ran away to Vancouver, British Columbia.

I thought that I could handle myself on my own, and to me God was a thing of the past and I didn’t need him anymore. My deep love for God broke due to trials that I believed were his fault (I know now they have only made me stronger). I rebelled against everything I thought that I believed and I felt that I was finally free. I ended up getting pregnant when I left home. I was scared and didn’t know what to do, but I was too proud to go home. I had my baby, a beautiful baby girl. However, events happened where I learned the true nature of the father and the secret that he was hiding from me. These facts led me to allow my child to be adopted by a family that could provide so much more for her then I could (this was 2010). I hated God!

I believed that is was God who made it so that I had to give up my baby girl in order to keep her safe from her father. I got in with the wrong crowd, and I began doing drugs (finally gave in to peer pressure from my “friends” that this would take the pain away). Also, during this time I received a phone call from an officer in the States telling me that my birth father (the one my mother left when I was 5) had recently committed suicide and that my years of searching for him were over.

Alysha stopped blaming God for all the bad things that happened to her. And God was placing a passionate calling in her heart as He drew Alysha back to Him.

God opened new doors for Alysha as she found work and found the man of her dreams.

After I was home things turned around. I stayed home for a while and then found a job in Creston BC where I met my husband. We have been happy ever since! I am now 22 years old, married for almost a year now, and soon we will have the first addition to our family!

The reason why CLI is something that I want so badly is because one day I want to be a Christian Youth Leader. This is my passionate calling into ministry.  I want to help other youth not go down the same path that I did. I want them to feel the deep love for God. I want them to have a passionate calling to serve the Lord. But not just because their church or parents tell them to, but because they choose it. They can be shown what a personal walk with God is all about, and they can be on fire as I am! I want my child that is on the way to be brought up in the right way, knowing that God is the savior of all. No matter how hard the trials are, no matter how dark the path may be, God is right there beside you; all you have to do is call on him. I want the youth of this world, the next generation, to know that no matter what you have been through….You can always become a “phoenix” risen from the ashes!! Newborn in Christ!

Christian Leaders Institute is for those who need an opportunity to serve Christ but have no other way to get high-quality training. Sometimes you experience much disappointment, heartache and pain in life. God may be summoning you with a passionate calling to do something for Him. You are passionate because you know that only God can save you and everyone in this world.