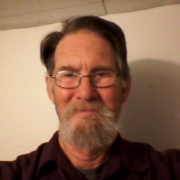 My name is Bruce Fidler, and I have a motorcycle ministry. I live in British Columbia, Canada. I thank God that I live in a country where I am still free to minister for Christ and share the Gospel. However, I will share more on this later. At the moment, I feel ill-equipped for Christian leadership.

My childhood was not bad at all. My parents were devoted to one another, but my father was a quiet man. Probably, this reticence was because he served six years in the British Army during World War II as a surgeon. He was not easily able to speak into my life. Weekly, I went to church and Sunday School but never really understood who Jesus was. At some point in my childhood, a presence (I believe it was Jesus) visited me. He gave no message, did not show Himself, just engaged in loving conversation. This event later became a fundamental part of my testimony.

After leaving home at 19 years of age, I completely fell away trying to find a place to fit in. I got married at 24. We had two daughters together, but there was abuse that occurred. Therefore, I became a single parent. In 1991, at the prompting of a Christian friend, I called out to Jesus. A man showed up to pray me into the Kingdom. A few years later, I got married again. Since I wasn’t ready, we were divorced in 2001.

Finally, I looked within myself and learned a lot about the importance of communication in marriage. I was single for twelve years and used a lot of that time to get back on my feet and study the early church and Jesus. In 2013, I expressed to God my loneliness. My ex-wife had died, and He set me up with the love of my life. We married five years ago, and now we pray together and study together.

For seven years, I have been in motorcycle ministry with the Christian Motorcyclists Association. We go in groups to motorcycle events to help and serve. This ministry is another place where I sometimes wish I had a better answer for a good question.

Back to my childhood visitor, four years ago, I woke in the middle of the night with a command to get my lexicon. I was to look up the name for the one who visited me as a child. The name consisted of two letters in Hebrew: Hee Nee. It turned out to be a command, not a name. This command I had not obeyed, and it was a revelation that brought me to my knees in tears. Hee Nee: “hay” means to behold, and “nun” is pictured as a sprouting seed meaning continuance. “Behold Continuously” is the command.

For the past two years, I have been volunteering at a breakfast post for the homeless. Then, last year, the pastor left to devote his time to his job and street ministry. Therefore, now, it’s my turn to speak to, comfort, and lead God’s people. This leading includes Bible studies, teaching, and more. I hope to be better equipped to do this ministry with the Christian Leaders Institute‘s free ministry training.