Mother Teresa lived from 1910 until 1997. She dedicated her life to blessing the poorest of poor and even creating an organization of women warriors who still passionately love the unlovable. 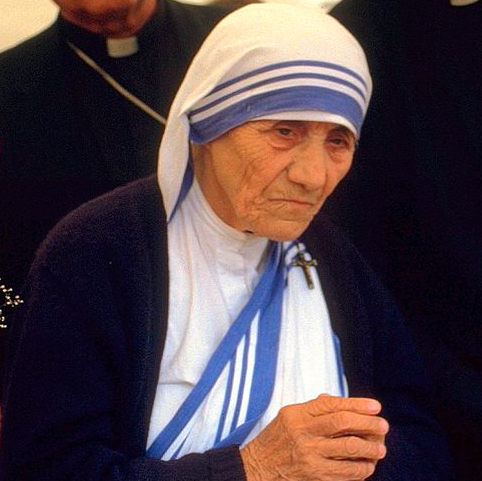 Mother Teresa once said,  “Keep the joy of loving the poor and share this joy with all you meet. Remember works of love are works of peace. God bless you.”

Wikipedia says this about Mother Teresa:

She began her missionary work with the poor in 1948, replacing her traditional Loreto habit with a simple white cotton sari decorated with a blue border. Mother Teresa adopted Indian citizenship, spent a few months in Patna to receive a basic medical training in the Holy Family Hospital and then ventured out into the slums. Initially she started a school in Motijhil (Calcutta); soon she started tending to the needs of the destitute and starving.In the beginning of 1949 she was joined in her effort by a group of young women and laid the foundations to create a new religious community helping the “poorest among the poor”.

Her efforts quickly caught the attention of Indian officials, including the prime minister, who expressed his appreciation.

But This Story Isn’t About Mother Teresa

The woman in this story isn’t Mother Teresa, but she has the same vision. She wants to bring Christ to a world where he is mocked, persecuted, and even despised. When her efforts are recognized by the authorities, her reward is not thanks for her servitude. She is not revered and honored by the world for her piety. Rather, she is rewarded with beatings, false accusations, and hatred. Despite this, her love for her people pushes her ever forward to preach the gospel. This is the story of God’s love that surpasses all human understanding. This is the story of Elizabeth, a woman of love in a harsh place:

My name is Elizabeth.  I live in Senegal a Muslim dominated country where Christians are few and mostly foreigners. Ministering in this country hasn’t been an easy task.  Eighty percent of my country is Muslim. And a good portion of them are traditionalists, ritualists and occultists.

Most in my country see Christian leaders as evil and at times will beat you or throw one accusation or the other at you. So it takes determination, tolerance and sacrifice to do ministry in this country.

I grew up as an orphan in a Muslim family. My education was sponsored by Roman Catholic reverend sisters, who told me about Jesus Christ. I struggled before I knew Christ. I almost died because of the sinful life I led. But thanks be to God, his grace saved me. At the age of 15, I attended a crusade by Evangelist Reinhard Bonnke that totally changed my life, I became so inquisitive to know Jesus and by his grace I have been able to know him.

I became passionate to share Christ here in this country seeing so many atrocities and wickedness going on. Our people are lost in sin, they don’t know about heaven or hell.  Even many who call themselves Christians here are very worldly and weak. I am called to evangelize and win souls to Jesus and teach them about the kingdom of God. I am also called to preach the Word of God to the unsaved souls, turning the hearts of dying people to know Jesus Christ.

I am called to be an EVANGELIST. I want to go to the villages, rural areas and many other places to preach the gospel of Christ. I have had so many challenges in my life. I especially have a passion for orphans and less privileged and I have adopted two of them. I have received beatings and accusations because I want to bring Jesus to my adopted children and others.

My local church has been so helpful to me, they encourage me when I feel like giving up. This church gave me a job, and the pastors pray for me.

This scholarship at Christian Leaders Institute will empower and train me for this great calling in the ministry. It will teach me so many things I need to know about myself, God and ministry.  It will help me to be presentable and effective not just as an evangelist but as a trained evangelist. Thank you for sponsoring my education!

Christian Leaders Institute is blessed to train a new generation of leaders who, like Mother Theresa, have no regard for themselves, but they have a calling to love the unlovable and proclaim the love of God even in desperate places like Senegal.

Why Ministry Training Should be Free

In-depth Ministry Training – “Get a Grip Elijah!”
Scroll to top