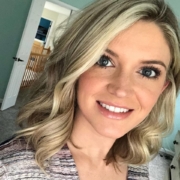 My name is Jamie Welch, and I am on a ministry study journey at Christian Leaders Institute. I was born in Washington, D.C. and now live in King George, Virginia. Currently, I work in a doctor’s office as a Registered Nurse that specializes in women and pediatric care. I have been married to my husband for five years, and we have three beautiful children together. Additionally, I am passionate about holistic health care and am a wellness advocate for Doterra essential oils.

My church life was sporadic in childhood. My earliest memory of church was pleasant at about 3-4 years of age going to “play” in the childcare of a church. In middle school, my parents and I attended a nondenominational church where I chose to be baptized at the age of 13. Some of my earliest memories of learning about God were through my grandmother. There was something distinct she told me about God not watching over children after the age of 12 unless they were baptized. I have heard nothing similar since then but nonetheless, I felt like I wanted to do it. At the age of 16, I worked in a Sunday School at a church. It was a paid position and it paid well for the age I was. I enjoyed working with children. It was mostly younger children – infants through about three years old.

I moved to Los Angeles California when I was 18 years old to pursue an acting career. I ended up with a few small roles in shows like General Hospital and How I Met Your Mother, but nothing substantial. Four years later, I came to a crossroads. My husband and I fell in love. However, he was moving across the country a few months after we started dating. At this point, I was the closest I had ever been to a leading role in a pilot series. I went through many auditions, callbacks, chemistry testings, and network testings. I asked God to help me decide if I was going to stay in California or move to Virginia to be with my love. Ultimately, the pilot canceled, and I moved to Virginia.

Our relationship had its share of good times and bad. It was complicated by him having a five-year-old son that he had full custody of. Five months after I moved back, we got engaged and married seven months after that. We attended New Life Church where my husband’s family attended for years. We took a marriage class through the church called Love & Respect. Additionally, at this time, I volunteered in the infant room during Sunday services. We stayed there for many years. After we had our first daughter who is now three, the dynamic of the church changed which led me away from it.

I finally found my new church home, Lifepoint Church. We are a small location meeting out of a high school that is a part of a larger network church. In January, I decided to recommit my life to Jesus, a person I have always known but drifted from for some time. I immersed myself in the teachings of our Pastor, began unpacking the Bible page by page and joined a small group. This small group included me and five other women that met for about three months. We went through a process called Freedom and attended a weekend conference at its conclusion. During those weeks, chains broke and weights lifted. Praying with people became the norm for me.

Throughout that process and especially after, things in my household really began to shift. A marriage and a household that I was pretty hopeless about did a complete turnaround. Our middle child was very sick for months and months contributing to a large portion of our marital stress, but things were getting better. However, the best part was my husband praying with me about our daughter; it was a pivotal moment for us. Putting God back at the center of our marriage is the difference this time. There are light and peace in our home that was missing for many years.

My ministry study journey is really just beginning. Although I volunteered or worked within churches for almost half of my life, I never had the confidence and knowledge that I could minister to others. During the freedom conference, I felt God speaking to me during two of my prayers with the women. One woman said that I had to let go of some pride and when those walls fell that there were opportunities for me to lead and minister. Another woman told me I had my Father’s eyes and could see His peace within me. I knew that I wanted to do more. I began asking God to show me how I could serve.

One afternoon, I was with a good friend of mine who is younger and looks to me for advice. We were talking about her upcoming nuptials. She had some issues with the person who was to marry her and her fiance. Before she even asked, I knew I wanted to do it. Later on that afternoon, she asked if I would officiate the ceremony, and I immediately accepted.

Other opportunities would come up within the same time frame. Past friendships of strong Christian faith began to resurface and help keep me in the right direction. Opportunities to pray for people and speak openly about Jesus presented themselves within my workplace.

I am excited about the opportunities that continue to come up. As with anything I do in my life, I want to make sure I am fully prepared. That is why I signed up for some ministry training through this free study program at Christian Leaders Institute. These classes are just what I need for my ministry study journey.