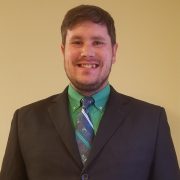 I’m James Schofield. I live in the United States and I am filled with ministry excitement. I’m a former atheist, who was saved by Jesus Christ through the witness of my daughter, who is a believer, and through a visit to a church designed just for an open-minded atheist, such as I was. I came in with a skeptical mind, but being an aspiring anthropologist, I decided to study this budding culture and through the study, I felt the Holy Spirit move within me the night before baptism when I felt called to pray.

My ministry excitement dream would be to bridge the gap between nonbelievers and believers in order to help those without Christ be more open to following Him. I also want to be able to find the common ground between denominations by using an open heart and mind to transform hearts to follow the Lord in unity.

The Getting Started Class at Christian Leaders Institue has confirmed and firmed up the beliefs I have and strengthened my walk with Christ. It has helped me to grow in my relationship with Him as well as in my interactions with others. It is helping me to begin ministering in a meaningful way.

I feel that the spiritual gift I received from the Holy Spirit would be service (ministry), and as such, I feel I carry the gifts of an evangelist and small group leader. I have been working with small groups for about three months now and have been able to create a deeply meaningful relationship with others and with God. As Jesus says in Matthew 18:20, “For where two or three are gathered in my name, there am I among them.” So, I feel the small group is where I am best acquainted and equipped.

My call to ministry came when I was speaking with a member of the church who had been a Christian his whole life. I was able to minister to him with my freshly Christian mind and able to make ties between the Old and New Testament he had never made before. I have found myself to be an open door for others to come to with their stories and troubles.

In my area, Christianity is viewed with a very discriminatory eye and with persecution, much the same as how Paul viewed the Christians before his conversion. I, as an atheist, had had the same view of the stereotypical “Bible thumper” as those around my community have. I aim to change those stereotypes.

My local church has been very supportive of my calling. They feel that anyone called to ministry should have a chance at it. Formal education, though helpful, isn’t required in order to spread the Word and they are there with any resources I need to flourish in my calling.

The scholarship to CLI is so unique and changing to a prospective servant such as myself. I grew up very poor and although I have had success in my life, I still can’t even imagine financially taking on the burden of attending a typical 4-year university or college to receive an education around my calling. This scholarship lets me be able to get the same or higher quality of education a “standard” university would give without the enormous cost. It really is an amazing thing to be able to offer this scholarship to someone such as me. Without it, I don’t think I could ever dream of being able to get the tools I need to make my ministry dream a reality.