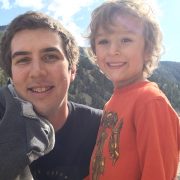 My name is Joshua Stromberg and I am on a ministry call journey. My faith started as a young boy, in Alberta, Canada. I knew of God growing up, going to church every Sunday, going to Bible camp every summer, and eventually going to youth group when I was older.

Unfortunately, I didn’t actually know God myself. I knew what to say, I sometimes had read my Bible, and would pray sometimes, but not really. As I grew older, the devil got more and more of a foothold in my life, and I moved away, into the world, when I was 16.

I was rebellious, knowing there was God and that Jesus had died on the cross for me. I didn’t understand it though. Through my later teens and early twenties, I lived for myself, partying and being a hard working stoner (pot smoker). Even after I married my beautiful wife at 21, who I met at 19, I was still living a self-centered life. We moved up to the small town I had left, a few months before we wed. That’s where God really started knocking.

After my son was born, my parents started taking him to church, which I totally agreed with as I knew that was what the Lord would want. In between, in the couple years before my daughter was born, I stopped drinking to get drunk. After I realized it was getting in the way of my relationship with my wife, I completely stopped drinking for a year. My daughter was born in the new year of 2015, I was still smoking pot daily aside from a few times of stopping for a month or so every now and then. She started going to church with my parents too.

So then comes around two years ago, 2016 on my ministry call journey. I started working for a family friend, who is also a board member at church. He prays every day before we start work and lives out a real faith daily. I know something’s missing, as I always have, but now I really know. Over the summer, I kept getting an inclining to go to church. During November that year, while we were out hunting, my unsaved buddy asked why I don’t go to church too since my kids do every Sunday. I didn’t have an answer. A few weeks later, I started going back to church.

After I was baptized, I really started trying harder to change. I swore less, didn’t smoke as much weed, would only drink a few beers a week, only tripped up on porn every so often, and felt guilty about it all. You could almost say I felt condemned. During the late summer, I told God I really wanted to change. I stepped out in faith and started raising my hands to worship Him at church. I started turning praise music on more and more, I cut the beer intake to almost none and cut right down on pot. Cutting down on all that was hard as my wife didn’t want to stop.

God is the God of the impossible. After much prayer and looking into other schools (some with tuitions of 10k+!!), I came across Christian Leaders Institute. One would say that CLI has been a Godsend on my ministry call journey! It could have been years before I started ministry training. After starting the scholarship class I’ve really enjoyed the insight and calling to ministry I have learned. My pastor is excited about it, as is the friend (now mentor) I worked for in 2016. I look forward to pursuing further ministry training through CLI and pursuing ministry through avenues the Lord leads me to.

In short, I once was lost, but now I am saved.

We Are All God’s Children, Even those in Prison
Scroll to top